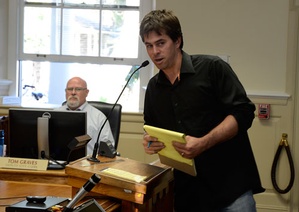 Chip at a Santa Cruz City Council Meeting in 2011

Chip was the cohost of SoWat TV on Community Television and he also moonlights as the Executive Director of the Downtown Association of Santa Cruz.

Since moving to the area in 1987, Chip has worked in a variety of roles in the local arts, including Company Manager for Shakespeare Santa Cruz, Production Manager for UCSC Arts Division, and Executive Director of The 418 Project. In 2003 and 2004 he co-founded the Santa Cruz Institute of Contemporary Arts with Kirby Scudder. In 2006 he received a Gail Rich Award.

Chip is married to Abra Allan