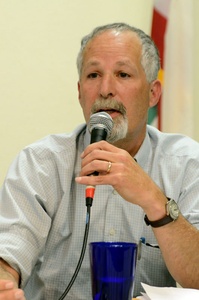 Lane a the Right to Vote on Desal candidates forum. Photo: September 2012.

Don Lane currently serves as the Mayor of the City of Santa Cruz,  He was elected to the council in 2008 and reelected in 2012.

Lane previously served on the Santa Cruz City Council from 1988-92 and was the mayor of Santa Cruz from 1991-92. He chose not to run for re-election in order to revitalize his restaurant business in preparation for sale and to recover from a difficult 3 years in office following the October 1989 Loma Prieta Earthquake.

Lane came to the area at the age of 17 when he attended UC Santa Cruz. After graduating, he opened the Saturn Cafe with some friends, which was later sold.