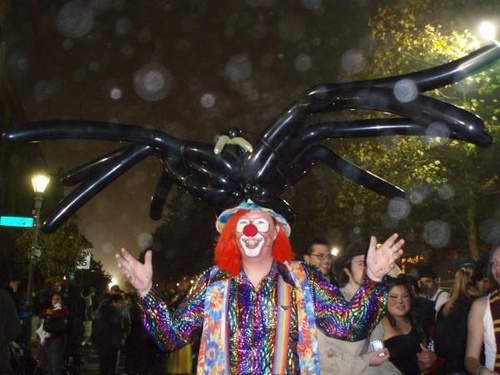 Mr Twister is the clown who would perform on Pacific Avenue. Whenever he saw a parked car with an expired meter, he would put a little change in to help the person avoid getting a parking ticket. He was then nearly arrested for this and the story gained national attention.

After a stint clowning in Nevada, he moved back to Santa Cruz in July of 2010, and he continues to dress up and perform downtown.

Biography Mister Twister, aka Cory L. McDonald, grew up in Santa Cruz, and started performing as a clown at the age of 10. As an adult he performed on the streets of Santa Cruz for many years. He gained national celebrity when he started feeding expired parking meters. When ticketed, and nearly arrested for this, he protested. The case went to the city council, who all put on clown noses and "honked" the law out of existence, presenting him with his very own parking meter. Mister Twister moved to Las Vegas, NV where he later married. He has two beautiful sons and a loving wife. He moved back to Santa Cruz in July of 2010 to once again bring smiles to the faces of the children who live here, no matter what their age.

Achievements Over 1 million balloon designs. His face on the mural on the back wall of the Poet & Patriot. Changing the law regarding parking meters. Making people smile.

2010-05-16 12:27:21   I remember meeting Mr. Twister's one night at a friends home. Back then I was very up tight, but that expirence led me to help my town and created The TikiMan of Tracy. I would love nothing more than to meet Mr.Twister's once again and shake his hand. Living in Santa Cruz back when Mr. Twister's was feeding meeters was a magical time for me, and will always be one of those memories I will tell until I die. I'm planning on coming to see him this july. —66.53.110.7

2010-06-05 01:56:34   I'll make sure to relate this story to him when I get home. He'll be thrilled I know, he loves to know that people remember him and that he's made some sort of positive influence. We'll be coming home at the end of July and he should be back working the mall by the first week of August, I'll happily update this page when I know any specific information. All the Best. ~ Oatmeal, aka Mrs. Twister —24.234.165.118

2010-11-08 11:29:22   Hi Mrs Twister. Please say hello to Cory for me. I ran the SC Buyers Club in the 90s when Cory was feeding the parking meters and twisting balloons. He dressed me up as a clown and we visited some of our patients in the hospital together. I am glad he is doing well and has a nice family. What a guy. Tom Seiler seilerbird at gmail dot com —75.202.3.239