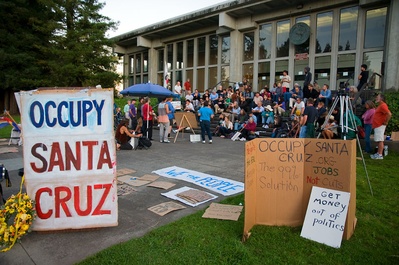 The general assembly held on October 11, 2011. Photo: The Water Street side of the County Government Center.

On October 4, 2011, Occupy Santa Cruz was formed by community members interested in joining the Occupy Wall Street inspired movements of protests in denouncing the fact that 1% of the population controls the majority of the financial resources in the United States. The first general assembly of the local version of the movement was held at Laurel Park, and the group consensed to begin the occupation on October 6 at San Lorenzo Park. The camping portion of the occupation remained in San Lorenzo Park continually from October 6 to December 8, 2011. The group attempted to move the campsite to Mission Plaza for a day, but moved back to San Lorenzo Park and the steps of the court house at the County Government Center.

On November 30, 2011, community members, many active with and supportive of Occupy Santa Cruz, entered the long vacant bank located at 75 River Street. Some hoped to establish a community center they named 75 River, and the building was subsequently "occupied" for 4 days. After repelling the police, hundreds of people went in and out of the building, and there were days of negotiations with the SCPD. The entire group wound up leaving the building, and apart from one person, no one was arrested until individuals were identified and warrants were issued in February of 2012. Eleven people were and charged with felonies, and they became known as the Santa Cruz Eleven. 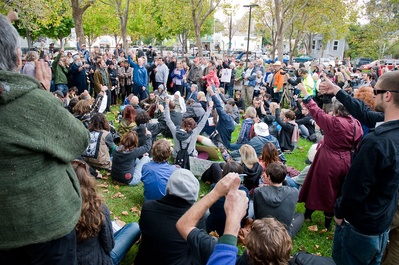 The first general assembly, held on October 4, 2011 at Laurel Park. 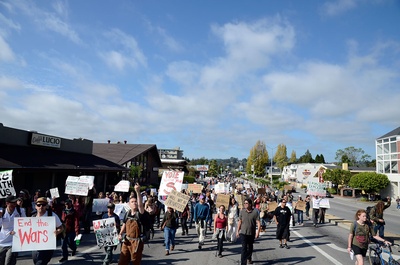