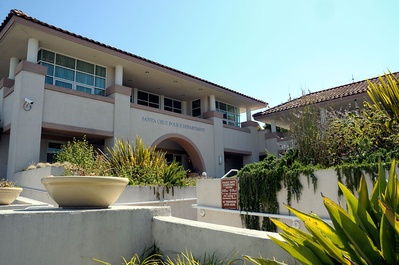 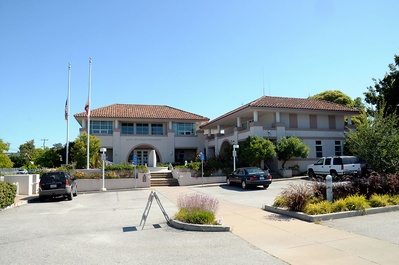 The Santa Cruz Police Department was founded shortly after the city was incorporated in 1866. The Board of Trustees that governed the city at the time appointed Robert Liddell, a local lifeguard at the time, as the first police chief in 1867, thus establishing the SCPD. He served as Chief of Police of the one-man department until 1882. There were three men in the department by 1900.

The traffic unit of the police department was founded in 1917. The first traffic officer was Frank Woodward, a motorcycle officer. Cars were added to the traffic unit later.

In the early years of the department officers did not wear uniforms.

Citizen & Independent Review of the Department

The Police Review Commission was in operation from approximately 1994-2003, and was comprised of citizens. The commission was replaced with a Public 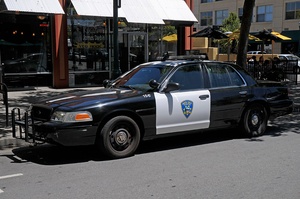 SCPD patrol vehicle parked downtown. Black and white are the long-standing colors of the SCPD. Safety Sub Committee who's members are appointed by the Santa Cruz City Council.1

The perimeter of the Police Department's main buildings is lined with a short, decorative 'fence' that is lined with extended columns. The extended columns add a vertical repeating 'bar' pattern to the fence, and to further accentuate the feeling of 'captivity' each column has a tile embedded in it with an artisitc motif. The subjects are generally animals and other examples of local wildlife rendered in multiples. Their placement at the outer perimeter of the station gives the feeling that the natural, wild, and free world is outside of the department grounds. The other view, of course, is that the department protects people's free activity, and as far as the architecture in downtown Santa Cruz goes, the design of the SCPD certainly reflects the local community more than most of the newer developments. 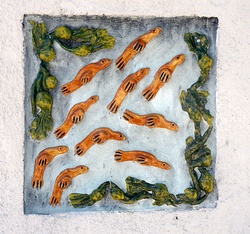 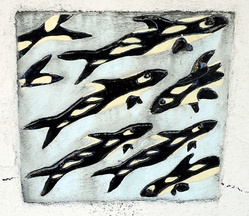 These Orcas (or 'Killer Whales') really play with meanings surrounding the department's black and white motif.

There is also a second type of tile that decorates the fence, and they are placed in between the extended columns. They were made by local elementary school students and the subjects they depict are also generally of nature and free activity. 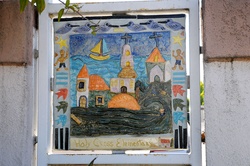 The public courtyard is lined in landscaping elements and features a fountain with areas to sit. 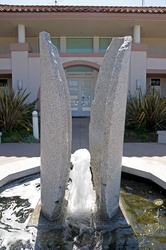