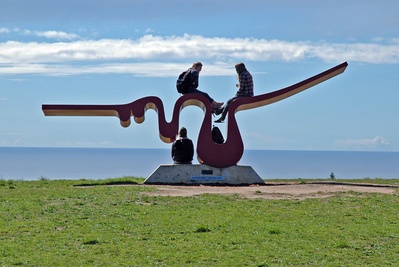 Today, sitting on the Squiggle is a Porter College rite of passage

Porter Sqiggle, or just The Squiggle, is currently the most popular nickname given to the sculpture by the Porter bus stop. It also goes by the nickname theThe Flying IUD (IUD) and the Porter Wave.

In reality, the piece is "Untitled." It was created by Kenny Farrell and dated 1974.

Many photos have been taken of people sitting on the Squiggle. It is also a popular place to smoke cigarettes since it's near the bus stop but not near any building air intakes.

Gentle warnings were added in 2008

The Squiggle has found its way to signs, plaques, and t-shirts now