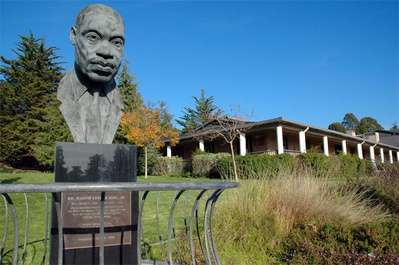 Dr Martin Luther King, Jr by Barrington McLean on the campus of Cabrillo Community College The city of Santa Cruz has a wide array of public art, due in part to the city's anti-graffiti program. Pacific Avenue alone could be considered its own gallery, with over amazingly 20 public art pieces.

Additionally, the city has implemented the 'Graphic Traffic Box Program', which muralizes traffic boxes around the city with murals.