Cooper Street in the City of Santa Cruz is one block long. It starts at Pacific Avenue and ends at Front Street. The parking meters have a two hour limit, with those near a green curb for 30 minutes. 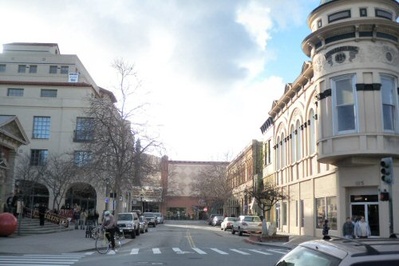 Cooper Street. The red sphere art is on the left. Photo: January, 2010

The street might have been named for Frank Cooper. Cooper was born In Gettysburg, Pa., moved to Santa Cruz in 1858 and became deputy treasurer of the Santa Cruz County Bank. Then he moved to Oakland. It is also possible the name came from John or William Cooper. They ran a general store on Front Street.

The courthouse of Santa Cruz and the County archives were once located on Cooper Street.

Plaque with history of the building across from the Cooper House. CLICK ON PHOTO TO ENLARGE. 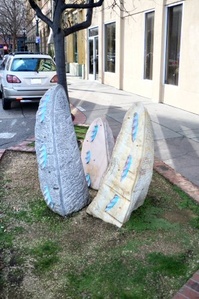