The Cooper House building in 2010.

The Cooper House is a mixed use retail/office building downtown. The new Cooper House was built to replace the original building that was eventually demolished after the Loma Prieta Earthquake damaged it.

The main entrance to the offices on Cooper Street is locked at all times, to get in there requires use of an electronic system. 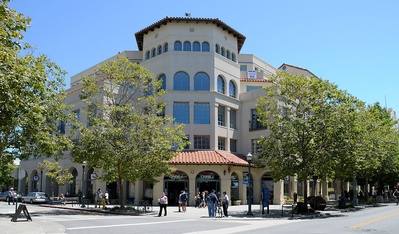 The developer of the building was Jay Paul. The retail area inside of the tunnel is called the Cooper House Mall. 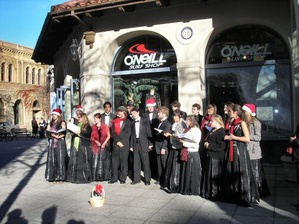 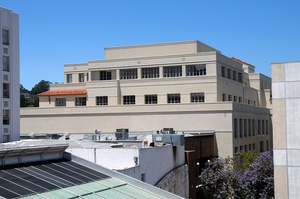 From this angle the Cooper House is inbetween the Palomar Inn and the McPherson Center in the downtown skyline. (Photo taken from the Soquel / Front Parking Garage) 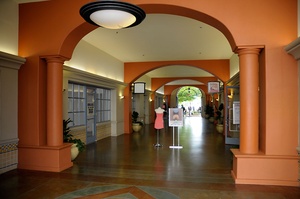 On the corner of Cooper Street and Pacific Avenue, the original Cooper House was a well known location in Downtown Santa Cruz. It was on postcards. It was once the courthouse of Santa Cruz. From the 1970's to the Loma Prieta Earthquake of 1989 it went through several owners. There were small shops and a restaurant and bar with outdoor seating. It was popular with many locals. Psychologist and author, Dr. Timothy Leary was often seen there.

After the earthquake in 1989, the building was considered so unsafe, they refused to allow shop owners to go in and salvage what they could. The first two hits of a five ton wrecking ball did little more than shake the dust. But it was razed, the ground cleared, and a new Cooper House was built in place. The new building has 100,000 square feet with shops on the ground floor and office space in the stories above. 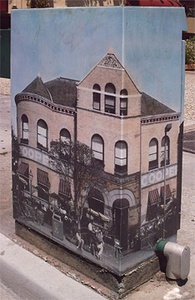 The old Cooper House is the subject of this graphic traffic box at Front Street and Cooper Street.