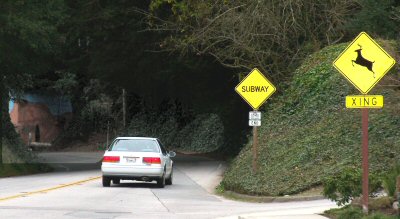 This sign is unique in Santa Cruz County and considered rare in Northern California.

ust past the intersection for Soquel Drive and Trout Gulch Road in Aptos there is a traffic caution sign that says "SUBWAY."

There is a "NARROW SUBWAY" sign on Highway 129 in Santa Cruz County just before the road crosses into San Benito County.

*Considering normal road traffic only. Not counting off-road, such as the beach beneath the Railway Bridge at San Lorenzo River or stream crossings.

2012-04-13 20:51:12   Caltrans uses the term "subway" for these kinds of railroad grade separations, though maybe its usage for signs has been deprecated. The only other sign like this I can remember in NorCal—warning of the "narrow subway" as ramps from 80/580 become Ashby Ave in Berkeley—looks rather weathered. —99.92.80.120