Camp Far West Lake is an artificial reservoir south of Waldo Junction and Spenceville State Wildlife Area, northwest of Wheatland and Horstville, and southwest of Beale Air Force Base. It extends into parts of Nevada County and Placer County, but the largest portion of it is in Yuba County. It is formed by Camp Far West Dam on the Bear River and Rock Creek. Long Ravine also empties into it.

Camp Far West Lake drains an area of 286 square miles, and at full capacity, contains 104,500 acre-feet of water. It has 3.2 square miles of surface area and 29 miles of shoreline. Its elevation is 260 feet. 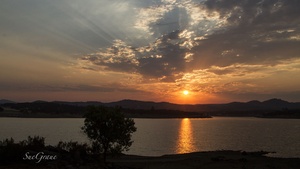 Camp Far West Dam was built in 1963 as part of the Central Valley Water Project for flood control and irrigation. It is owned by South Sutter Water District and is constructed of rocks and dirt. It is 185 feet high.

The lake is named for a Gold Rush immigrant camp that was located slightly downstream. The camp was the farthest west camp that arriving gold miners passed through before reaching the Sacramento Valley.

For boats, the speed limit is 5 miles per hour when within 200 feet of any shoreline or swimmer.

No firearms or fireworks of any kind are permitted.

Anyone causing a disturbance or violating any rules will be escorted off the premises. Management reserves the right to refuse or revoke entrance to anyone.

From April through September, camping reservations are accepted from Monday through Wednesday. Reservations must be for a minimum of two nights; on major holidays, the minimum reservation is three nights.

From October through March, camping is a first-come, first-served basis.