The Ann Arbor Newshawks were a satirical "ace team of reporters" - under the names Beaumont Vivant, Chance Langford, and Jacques Labatt - who produced a quarterly-ish "investigative" video report from 2008-2012. The characters were played by Ann Arbor residents Stuart White, Bob Dailey and Pete Fink.

The final Newshawks report was in August 2012. Dailey, who played Chance Langford, died later that year. 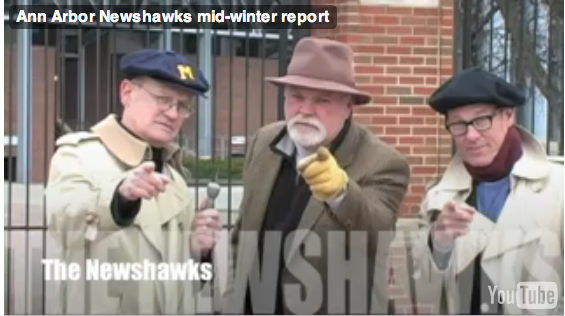 August 2012: Dreiseitl fountain in front of city hall, parking, tattoo parlors for seniors ("Elder Tats"), and the game show "You Can't Get There From Here."

January 2011: The Big Drip, an outdoor swim competition to be held in Michigan Stadium.

May 2009: Bike commuters, the closing of the Ann Arbor News.

August 2008: Washtenaw Avenue as a gateway to the city,