The area that today comprises the front lawn of the Power Center, the bed of Fletcher Street just below Huron Street and the open area just east of the Rackham Building is today called Felch Park. The land's original post-settlement use, however, was as the original Ann Arbor village burying ground. Before extensive modification, it was originally part of the east face of the gully which today still defines Glen Street and Palmer Field and which once terminated in a marshy glacial pond. Today the bed of that pond lies beneath two substantial modern buildings: the early 20th-century Central Power Plant with its landmark smokestack, and the recent Palmer Commons.

The site was extended in 1848 when a plot at the corner of Fletcher and Washington Street was acquired by the Jews Society of Ann Arbor to serve as the first Jewish cemetery in Michigan.

As the grounds began to fill and surrounding lots began to be built on, it became clear that the site would be inadequate for the growing town. As a result, Forest Hill Cemetery was founded in 1857 on the high ground several blocks directly east. Beginning in the 1860s, graves from the original burial ground were moved to Forest Hill and other locations. Because such removal was deemed to be the responsibility of families of the deceased rather than the village government, some graves were left for decades longer despite the changes. This made it possible for a local reporter to discover the ornate headstone of Johann Mueller in a neglected state there as late as 1871. 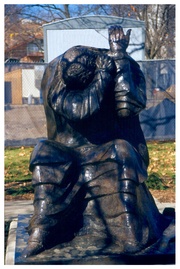 The adjacent Jewish Cemetery abided a bit longer. By the 1880s the original Ann Arbor Jewish community no longer existed, its families having relocated to both Detroit and to farms in outlying rural areas. In 1900 the remains were reintered in Forest Hill, and the land was annexed to Felch Park. It eventually became part of the University of Michigan campus under the name Raoul Wallenberg Plaza. Today a memorial to the victims of the 20th century Holocaust can be seen at the site, marked by a striking 1994 bronze monument by American sculptor Leonard Baskin, along with a Michigan Historical marker.

By 1890 all of the identifiable graves, including Mueller's, had been removed, and in 1891 the burying ground was officially abandoned. Apparently the location of some known graves was lost in the interim: Michigan's first Chief Justice, William Fletcher, was buried there in 1852 but never got relocated (an historical marker was placed in the park in his honor). In 1898 (not 1916 as reported elsewhere) an ornate Egyptian-style casket, thought to be his was uncovered by workmen and relocated to Forest Hills. Then in 1966, during the construction of the parking structure adjacent to Power Center, another casket was uncovered, this one with a plaque identifying it as belonging to Justice Fletcher. To this day no one knows who is in the other casket.

Three years later, in 1894, the land was reinvented as Felch Park, named and dedicated in honor of Alpheus Felch, a leading citizen who had been a Michigan governor (1846-47), a US Senator (1847-53) and a U-M professor of law. Upon his death in 1896 Felch himself was interred in Forest Hill.