Rebecca Head was a consultant in public health administration and trustee of the Ann Arbor District Library board for several years. She died on June 23, 2015 of uterine cancer. 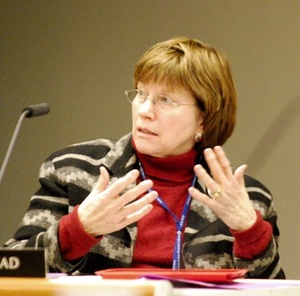 Rebecca Head at a February 2014 meeting of the Ann Arbor District Library board. (Photo courtesy of The Ann Arbor Chronicle.)She was elected to the library board 2004, then re-elected in 2008 and again in 2012 for a term ending in 2016. During her tenure she served as president of the board, and in 2014 was board secretary. She resigned from the board in 2015 prior to the end of her term, for health reasons. The board appointed Jamie Vander Broek to serve the remainder of Head's term.

In 2013, she retired as the associate director for the University of Michigan School of Public Health’s Office of Public Health Practice, where she was also co-investigator for the Michigan Public Health Training Center. She previously was health officer/director for the Monroe County health department from 2005-2011, and served in various positions with Washtenaw County government from 1986-2006. Her jobs there included director of public health preparedness, director of environment & infrastructure services, and public works director.

Along with fellow AADL board member Jan Barney Newman, Head served on the board of the Ann Arbor-based Girls Group nonprofit. She was a member of the Interfaith Council for Peace & Justice Steering Committee/Board.

Head held  a doctorate in toxicology, a masters degree in environmental health sciences, and a bachelors degree in education.

Head – who was born on Nov. 27, 1948 – was married to David Stead, a principal with Resource Recycling Systems, a member of the Ecology Center board, and a former member of the city of Ann Arbor's Environmental Commission. They lived in the Allmendinger Park neighborhood.