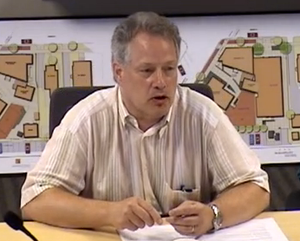 Roger Hewitt at a meeting of the Ann Arbor DDA board.

Roger Hewitt is the owner the Red Hawk Bar and Grill on State Street and of revive + replenish, a grocery and cafe in the Zaragon Place apartment complex. He previously was a partner in the Zanzibar restaurant on State Street, where Sava's is now located. He has served on the Ann Arbor Downtown Development Authority board from 2004 to 2016, and was appointed to the Ann Arbor Area Transportation Authority in 2016.

Hewitt was first nominated to the DDA by mayor John Hieftje in 2004, and confirmed by the city council. He was reappointed in 2007 – a term that was later adjusted by the council in 2008. He was reappointed again in 2012 for a term running from August 20, 2012 to August 19, 2016. During much of his tenure he has served on the executive committee, as board chair and treasurer. He currently (2014) is board vice chair and co-chair of the operations committee.

Hewitt has previously served on the board of the State Street Area Association. He's a member of the Ann Arbor Campus-Community Coalition (A2C3), with the mission to "promote health and wellness by reducing harm from substance use among youth and, over time, reduce substance abuse among adults."

In the 2014 mayoral race, Hewitt endorsed Christopher Taylor and was listed as a supporter on Sabra Briere's website – two of four Democrats and city councilmembers who ran in the August primary.

He is married to Patti O'Rorke. They live on the city's northwest side, near the Miller Nature Area.