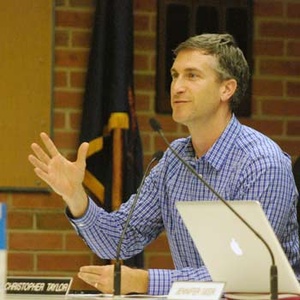 Christopher Taylor at a September 2013 meeting of the Ann Arbor park advisory commission. (Photo courtesy of The Ann Arbor Chronicle.)

A Democrat, Taylor was a three-term member of the Ann Arbor City Council, serving the city's Ward 3  from November 2008 to November 2014. Aside from his initial race in the August 2008 Democratic primary against Stephen Kunselman, Taylor ran unopposed in each subsequent primary and general election – until the 2014 mayoral race.

Taylor is a partner at the law firm of Hooper Hathaway. His practice focuses on the representation of local businesses, non-profits, and individuals.

Outside of his legal practice, Taylor is an active member of the Ann Arbor performing arts community, and has performed lead roles in the Burns Park Players musicals. He, his wife, Eva Rosenwald and two children, Henry and Ruby, live in the Burns Park neighborhood.