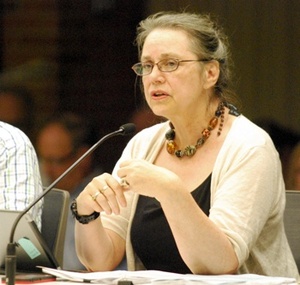 A former Ann Arbor Democratic Party Chair (in the early 1990s), she has been active in local politics since 1978. She was first elected to the City Council in 2007 representing Ward 1, and since then she has been re-elected every two years to that position. Her current term runs to November 2015. She also serves as the city council's representative on the Ann Arbor planning commission.

Briere's political campaigns are typically marked by her stance that she would be an "independent voice on Council." She introduced and Council passed the Citizens' Participation Ordinance in 2008, which mandates increased notification and citizen involvement in many proposed developments. This ordinance altered the approach to citizen input in just a few months.

Briere has identified herself closely with neighborhood issues, such as working to get the Lower Town Historic District created. She has also supported the Downtown Development Authority and downtown businesses. She supported the Library Lane underground parking structure but opposed the Police/Courts facility (now called the Justice Center), fulfilling a campaign promise. She opposed high-density student housing at 42 North, but in the end supported 601 Forest. She voted against the housing development at 413 E. Huron.

Briere grew up in Indiana and moved to Ann Arbor in 1973. She is married to attorney David Cahill, her third husband. The couple, who've been married since 1986, lives in an historic house in the Lower Town area. She has an adult son, John, from a previous marriage.