Flour mills being among the most basic needs of a new settlement, Ypsilanti's pioneers founded a number of them, small and large, over the years. In 1888, Chapman noted that, "Looking back over a period of 55 years, one is forcibly reminded of the energy which characterized the early mill-builders." (pg.1127) Mills called out by Chapman include, 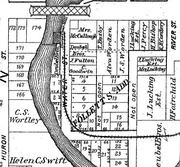 The intersection of Water Street and Michigan Avenue hosted a flour mill from 1829 until at least 1895. 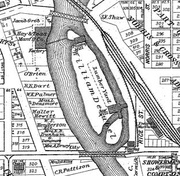 The 1895 atlas of Ypsilanti showing the City Mill flouring mill to the northeast of the Cross Street bridge.