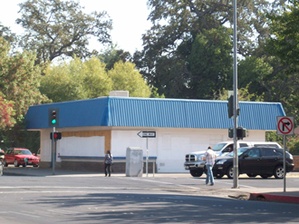 Fosters Freeze was a restaurant in downtown at Ninth and Broadway. They served burgers and fries as well as various soft serve ice cream desserts such as sundaes, floats and cones. Opened in the 1950s, the Chico location was in business for 43 years before closing its doors when the owners retired. Although the Chico location has been closed for some time, one can still visit Fosters Freeze not far from here. There are still locations in nearby Paradise and Oroville. The property was bought in January 2007 by Chico Volkswagen. They are planning to expand their dealership into the lot and develop an employee parking area on the other side of Little Chico Creek. 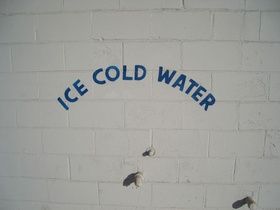 Apparently one was once able to get ice cold water on the side of the Fosters Freeze building The pathway for Chico Volkswagen to redevelop the lot wasn't easy as it required changes to the general plan and a zoning change. The change was opposed by the Barber Neighborhood Association as they feared the property would be developed into less desirable businesses such as a gas station. They had other ideas for the property such as a park that would be the "Gateway" to the Barber Neighborhood. Concerns were also expressed about the environmental impacts on the creek itself. These concerns were addressed in the plan with a fenced 25 foot setback.

On September 4, 2008, the Chico Planning Commission deliberated the rezoning changes required for Chico Volkswagen to expand. They voted to reject the plan 4-2 because it did not reflect the nature of the general plan. Mark Abouzeid, owner of Chico Volkswagen, had been supported by some officials in the City of Chico (who stipulated few requirements to develop the property) and had spent large sums of money on fees from to the city and a mortgage. Abouzeid was quoted by the Chico News & Review as saying "How are we encouraging local businesses with this behavior?"

The Planning Commission, however, is just a body that makes recommendations to the city council. The council took up the issue on October 21st on considered the commission's recommendation. They discussed the plan with a presence of over two dozen people. Many were from the Barber Neighborhood and spoke out against the rezoning change. But some from the same neighborhood voiced support for the auto sales business. The council members expressed support for the expansion as an economic boon — new auto dealerships provide Chico a great majority of sales tax revenue. A few members, including Mary Flynn thought that increasing the opportunity for Chico Volkswagen to do more business would also help bring business to downtown. After the discussion, the council voted unanimously, 7-0, to adopt the plans.

2008-11-25 09:40:47   I'm glad that the city council voted to support the expansion of Chico Volkswagen. The lot is really an eyesore and I imagine, in the 2008 economic situation, it would stay that way for years without this vote. Of course so far I've seen nothing being done to the property by the dealership but here's hoping. —RyanMikulovsky