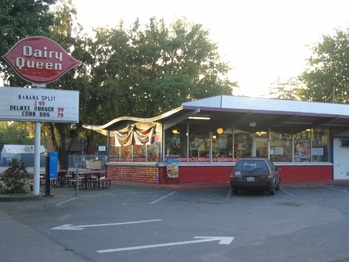 Not even sunset slows business for DQ on hot days! 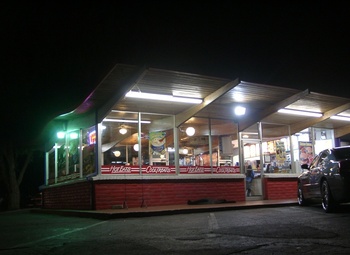 The Dairy Queen has one of the coolest roofs in Davis—a handsome wooden "W", inside and out 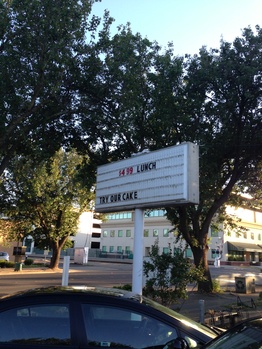 According to Wendy Weitzel's "Comings and Goings" column:

Dairy Queen, one of Davis' longest-lived fast-food restaurants, will likely close in October 2012. Owner Shahid Iqbal said the franchise wants him to make more that $50,000 in cosmetic and accessibility improvements to the building, which he can’t afford.

In October 2012, the company gave the Davis Dairy Queen store a six-month extension on more than $50,000 in cosmetic and accessibility improvements required for the site. The owner is working with the landlord to try to meet the standards set by the Americans with Disability Act.

In March 2013, the company gave Davis Dairy Queen a second extension "through the warm months." In May 2013, it separated from Dairy Queen and was renamed to "Davis Burgers & Shakes", or as it was unofficially known, "Dairy Thing."

The store closed at the end of July 2013, its hollowed remains left to fester into urban blight.

In other words, no more licks for you.

At the Davis Dairy Queen, you can order your choice of hamburger halal. Halal meat is the Islamic equivalent of Kosher meat. Be sure to specifically ask for halal meat as it is only available upon request. Things halal can also be found at Red Sea Food Market and Halal Meat, Shah's Halal Food and previously at Norm's Pizza.

Dairy Queen was one of the first fast food chain restaurants to come to Davis. It has outlasted its earliest competitors, namely Sno-White and an A&W Drive-in.

As of 10 May 2013, all Dairy Queen branding has been removed. All of the same items are still served, only with generic names. For example, "Blizzards" are now "Snow Storms." The restaraunt has yet to rename itself after this, making it "The Eatery Formerly Known as Dairy Queen." Unless that would also void some sort of legal contract, in which case you can safely refer to it as whatever the marquee currently displays.

As of 2015, the Dairy Queen building is being completely rebuilt into an architect's office. The iconic wavy roof has been preserved, however.

The dessert stuff tends to be good, whereas the food (hamburgers, fries, etc) tends to be bad. Really bad. As in "cooked by a guy who normally sells ice cream" bad. — jw

2007-03-26 11:34:53   My roommate decided to go here for dinner yesterday. We both ordered a number one (bacon cheddar burger). We both came to the conclusion that their food (the burgers, at least) was pathetic. Really pathetic. The meat was very overcooked and dry. A measly pickle was slapped on top with a little bit of ketchup and mustard. The cheese looked like plastic. My soda was 85% ice (luckily they don't charge for a refill). For 6 dollars, I could have gotten a better burger elsewhere. —StudentRuby

2007-06-05 00:11:19   I agree with the negative comments above... this DQ is in serious need of some new management. I ordered a basket of fries once, which was actually kinda expensive here, and let me tell you...Ive had better fries that were frozen. Steer clear of the food here. Its like buying a 99cent heart attack. —christyspencer

2007-07-22 13:43:20   The desserts are pretty good like the Blizzards but I agree with everyone that the food is terrible. I think it depends on the time of day though. The lady there usually cooks all the food fresh but if the husband is there alone he warms up the food via the microwave (usually at night). Last time I went for a burger all I heard was a *ding* and my burger was done. —BrandonToo

2007-12-18 14:41:49   I have a sensitive stomach, but I've never had any problems with the dairy queen burgers. Granted, I only ever eat the #5 (crispy chicken) and fries, but it's deliciously fattening! The fries are really good. And the place is never busy. —Kiran

For me, no complain at all for Dairy Queen. —JK

2008-06-18 15:48:29   I wasn't complaining about the fact that they charge extra for a credit card, I was simply warning that they don't let you know they are doing it. I would respond to the rest of your statement, but I don't exactly know what you were trying to say. —JoePomidor

2010-07-02 13:17:39   I'm definitely a fan of dairy queen, a lover of blizzards and chocolate dipped cones. I went to this Dairy queen about a year ago, I guess I never wrote up on it because my mind was trying to block the experience to protect my sanity.

I ordered a small vanilla cone and some fries. the soft serve was runny, but it wasn't the worst. the fries were sufficiently hot and salty. so far so good. My girlfriend decided she wanted a blizzard, which I wholeheartedly supported since they're... amazing. She ordered a cookie dough (great choice) and after paying we watched the guy throw a scoop of cookie dough and a shot of chocolate syrup into a cup of vanilla soft serve. What happens next betrays blizzards and dairy queens everywhere. He throws it on the blizzard whipping stick thing for all of 5 seconds, doesn't flip the cup before handing it to my girlfriend, and she is left eating a cup of vanilla ice cream with a column of chocolate syrup and cookie dough chunks down the middle. disappointment was had, tears were shed softly into pillows alone that night.

when i saw that blizzard, a part of me died that day. And because of that I have not returned. —EugeneB

I have spoken to other people who have had this experience, food is advertised at one price and you are charged another. —DagonJones

2011-03-03 15:34:06   I have had mostly positive experiences at this Dairy Queen. I only go to get blizzards. They did mess up my blizzard once by putting chocolate chunks in it instead of cookie dough and once I brought it to their attention the employee thoroughly examined it as if I were lying and then begrudgingly added some cookie dough. It would have been nice if she had made me a new one because I did not want the chocolate chunks but I wasn't going to argue over chocolate chunks. The owner is a bit nicer than the other employees but as long as I get my blizzard without confrontation I'm pretty happy. —LoriOrf

2011-06-26 13:23:39   I find it odd that there are so many complaints on here... I went to this Dairy Queens with my family two weeks ago, and my experience was quite exceptional, in the good way. The two men who served us were absolutely amazing; my dad even had a nice chat with one of them (manager, maybe?). He does NOT usually talk to non-Chinese people, rofl. This man was from Pakistan, yet my dad, the ultimate racist, befriended him in one trip. As for the food, we got dipped soft serve cones, which really now people, are what Dairy Queen's is all about, not the burgers used to add "variety" to the restaurant :P ... as well as a banana split. Classic Dairy Queens. I found no problem with any of it. :] Also, the restaurant was very neat and clean. Good service, good desserts. What more do you want? Oh, and the banana split was advertised for roughly 3 dollars, though it was 4 on the menu, and we were charged the advertised price ($3). Perfect visit :] No complaints. —KimberlyKitHom

2011-06-26 14:47:14   Careful when using credit cards here. Last time I visited I noticed they print the whole credit card number on both receipts (one for the store as well as the customer's receipt). —EricaMacGregor

2012-09-21 00:50:32   I'm saddened by their likely closure. The place will remain a fixture in my mind. I remember the same two guys working there about 10 years ago. My friend used to live in the apartment building next door and we used to hang out at DQ all the time. I can tell they've been struggling in the last few years, especially with image-conscious Davis students preferring to tag along with the yogurt fad, thinking that DQ is trashy. Oh well. —ScottMeehleib

2012-10-03 21:11:34   Crap, just heard about their imminent closure. Got to go here one last time. I remember going all the time as kids. There's was this time when my dad got really PO'd that the person behind the counter couldn't understand what we were trying to order. I'm pretty sure we didn't go back for a good year after that.

Still, sad to see it going. I kind of like the architecture of the place, and eating next to the train tracks is actually kind of fun. —CecilioPadilla

2013-05-08 22:46:54   Went there today for a blizzard and noticed that all Dairy Queen branding had been taken down, and generic cups were being used. Appears that the Dairy Queen isn't actually a Dairy Queen any more. —thebluereverend