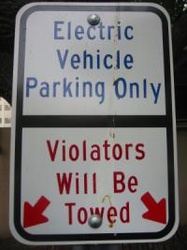 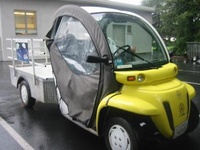 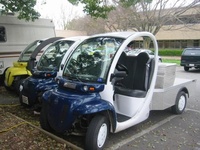 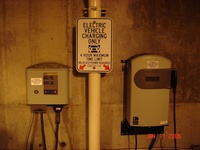 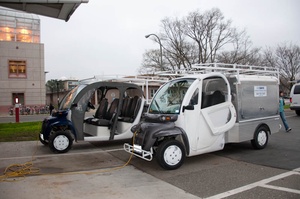 Both the City of Davis and the Campus have a lot of Electric Vehicles and there are Charging Stations around town.

City Council representatives are each given a Global Electric Motorcars, LLC (GEM for short) electric vehicle as part of their compensation. Many of these vehicles are 2 or 4 seaters without doors. You used to be able to loan one of these for a week through the GEM electric car public loaner program.

One of the more distinctive is the Little Green Electric Car seen around town.

Along with the Xebra and Corbin three wheelers, one can spot a Zenn or two around town. The Zenn actually is a quite beautiful car, despite nothing being more beautiful than a Bianchi. They also are fairly normal looking, which is a plus I think in many people's minds. The first Zenn I knowingly saw was at the Whole Earth Festival, where Davis Electric Cars congregated by the CoHo. That was a very useful place for information on electric cars in all forms. They even convinced my father of the Muscle-Car era to buy a Prius. Well done!

The campus has research efforts into electric vehicles. These include the work of Prof Andy Frank.

2005-08-30 07:45:06   I've got a problem with Electric Vehicles as all I see them doing is shifting the burning of fossil fuels and pollution to a more concentrated point, namely the power plant the electricity is generated from. I so far have been unable to find anything showing that electric vehicles really do produce less pollutants and burn less fossil fuels when this is considered. —ZacMorris

2005-10-24 15:43:19   There was an evaluation I saw, and I can't remember where that evaluated the miles one gets from a pound of carbon burnt in various ways. Gasoline was the least efficient, diesel was better, but electricity from power plants was substantially more efficient in terms of power down the road per pound of carbon consumed. —RocksandDirt