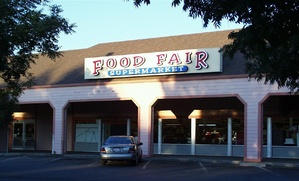 Food Fair was a Supermarket in Westlake Plaza in West Davis. It closed on May 21, 2006.

Paul Hayer purchased what used to be Ray's Food Place in March 2005 and added an organic aisle, coupon book, and updated deli in order to attract customers. However, this attempt failed, due to high prices and the nearby Wal-Mart in Dixon. At present, no other company will be taking over - the place will just close and become unused office space. While city ordinances require a grocery store anchor for the shopping center, this restriction may be relaxed as it was for Davis Manor. 1

As of May 15th, most of their deli and refrigerated items (such as meats and cheeses) are on sale. It's a good time to buy cheese, especially the few more uncommon ones not offered everywhere. For example, halloumi was on sale for less than a third the price of nuggets, but is now sold out). Canned and bottled goods are not going to be put on sale.

The beer is in the back-right corner of the store. The wines are in the back-center. They have a Western Union center near the front registers. They have Gelato in their frozen goods section near the ice cream, something the other major grocery stores do not carry. It also carries some random oddities and food products, perhaps because it cannot compete with the more common grocery goods. Walking up and down a few aisles may not be so bad, and may even tempt you to buy something (like canned octopus!). They supposedly have a good selection of spices and herbs to be used for ethnic cuisine that the major stores also don't usually carry.

They have a few kinds of fresh bread, delivered daily from Village Bakery.

This place should be avoided unless you absolutely can't help it. Their prices are absurd, their selection abominable, and their goods sub-par. Not to mention, of course, that there are never more than one to two people working there at the same time (they never have any business, any more than that would be unnecessary) so no service whatsoever. Pretty much the only reason you would ever want to go here is if either you live in West Davis and don't have a car or a bike to go to anywhere else, or you enjoy their goodish selection of microbrews (which you can also mix and match - for more money). Stick with Nugget or Safeway or Albertsons and forget about this place - DanielMedinaCleghorn

KrisFricke advocates replacing this place with Trader Joe's. In this location, Trader Joe's would be at the greatest possible distance it could be from the Davis Food Co-op, and at the very opposite end of town from either Nugget, thus negating the arguments that it would put the aforementioned places out of business. Also, Kris would like to note that "Ray's Food Place," the former name of Food Fair, was a much much better name. Ray's had personality, and "food place," that's just funny. "Food Fair" is the most utterly commercialized unimaginative name I could imagine.

The only problem with putting a Trader Joe's there (which would be phenomenal) would be that TJ's is too nice for the rest of that mall. TJ's, while not a very expensive place, wouldn't really fit in with the rest of the businesses there, since they're mostly small and the complex isn't very well maintained. It's okay, but I think that a Trader Joe's would probably pass that place based on the the mall. Shame, Trader Joe's could do really well in Davis.

Think about it this way: If Trader Joe's did move in (and that would be a happy day if it were to happen) the value of the property would increase and that would be a good thing. Anyways you can't be bashing a shopping center that has the incomparable Chuy's Taqueria and a video store/post office. SteveKent

I agree, having a Trader Joe's on the West end of town would be fabulous. Considering Village Homes is nearby, I think they could do well there. -SteveDavison

My friends know it as "Food Unfair", due to the relatively high prices compared to the chain supermarkets. -BrentLaabs

I went through there earlier looking for some candy and to give the place a serious try as I live right behind it. The prices seriously are ridiculous on most things. But...to their credit, they do seem to have some more unique items. And on the more unusual or rare items, prices aren't too horrible. They sell a couple organic cheeses and other things which I have seen. A couple different kinds of canned octopus and other seafood things you wouldn't find at Safeway. I might go back and try that out later, pretty curious. They have one aisle labeled "ethnic" food or something similar, but nothing there is really memorable. -ES

2006-03-07 03:57:17   I like shopping at Food Fair cuz there is this really cool girl who works there. I think her name was Barbara. She was the best checker I ever had. I still dream about her sometimes... —AubreyJohnson

2006-05-15 00:11:43   I normally don't say bad things about places, but this supermarket just plain sucks. It's way too expensive and brings nothing to the table. The only good thing about it is that it reminds me of a funny joke from Spongebob Squarepants.

...now I've said too much. —SteveKent

1. Curda, Beth. Despite Food Fair supermarket's efforts to meet customers' needs in West Davis, competing stores have defeated the independent grocer, and it will close its doors Sunday. The Davis Enterprise. 2006-05-16.