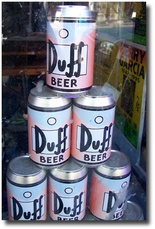 Duff beer is perhaps the best beer. Beer is considered by some people to be a divine beverage; a fermented product made from malted barley, hops, water and yeast. Non-German heretics may add other ingredients, such as honey. Many American craft-brewers delve into a very wide variety of non-traditional beers such as IPAs.

Many bars serve beer. There are also a few ways to get free beer, but said prospect is difficult, especially if you are male. At some bars, buying pitchers of beer can be a way to save money.

Davis is also home to the Sudwerk brewery, where you can find annual beer-related events such as the Davis Beer Festival. Another beer festival in Davis, started in 2013 by de Vere's Irish Pub and Sudwerk is the Davis Bike and Brew Fest, benefitting the US Bicycling Hall of Fame.

There used to be a "homebrew" place in Davis called Brew-It-Up where you could go and brew your own beer using their equipment. This moved to Sacramento and has since closed. Other wiki users have reported success with supplies from the Original Homebrew Outlet, also located in Sacramento. Another choice is Woodland Homebrew Supply.

College students and Alcoholics can take comfort in forties. Out of state-ers may be unfamiliar with the CRV tax.

The Dollar Tree, being the mad note, sells Beer Steins for (oh my god!) a dollar. Fortunately they are quite sturdy and are fun to use. Unfortunately my friends and I have bought pretty much all of them out. -JohnDudek

UC Davis now has its own beer: Aggie Lager, brewed locally at Sudwerk.

For those who would like some flavor in their bottle, a list of places to find good beer in and around Davis:

And for a column on craft beer in Davis (as well as other beer-related articles), check out Brewhaha on Davis Life Magazine.

Any event can be a beer related event, so long as an attendee provides their own malty beverage and contempt for the law. For those missing the spark of anarchy, there are several official sanctioned events in town.