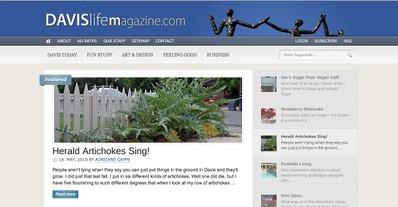 Screenshot of the new blog format, May 2010

Davis Life Magazine is a wonderful and perhaps divinely-inspired addition to the Davis media scene. In the style of other "City" magazines, Davis Life Magazine has been designed as an online magazine (e-zine) to highlight restaurants, organizations, businesses, people, and local happenings in and about Davis. (Funny — isn't that what the Davis Wiki does? Oh, wait — the Wiki documents, not highlights).

You can sign-up for a free online subscription to Davis Life Magazine so that you're notified when new stories are posted. You can select all of the categories, or only the ones that interest you.

They just launched their new format on May 1, 2010. They feature daily content written by over 20 bloggers with photos and features about Davis and the surrounding region.

If you have any story ideas, or if you would like to blog for DLM, please email Cary Arnold at [email protected]

** Update... Davis Life Magazine was transferred to a new owner many years ago. I'm unsure of the current status of what he's doing with it, but I don't think it's active any longer. ** 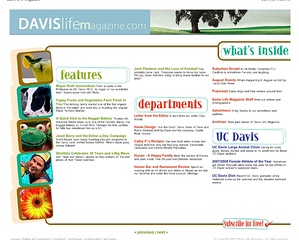 You can click on the "archive" footer on the lower, left-hand side of any page of the magazine, except for the cover, to reach the archive section. Once there, you can open up any of the past issues.

The June 2008 issue included stories on Davisites and Channel 13 news anchors, Sam Shane and Pallas Hupe', photos and information on the Pence Gallery Garden Tour in Lake Alhambra Estates as well as the Heart of the Home Kitchen Tour that benefits the Red Cross, Fuzio Universal Pasta restaurant review, a Davis group that calls themselves Foodies on the Fly, Puparazzi, the UC Davis greenhouses and Garry Pearson, UC Davis student summer hairstyles by David Martin and Tenaya Freitas, library storytime as told by 9-yr-old Adrienne Weiss, Aquadarts, Watermelon Music, Newsbeat, Pastor Exter Hardy from the Poleline Baptist Church, wonderful columns and Chapter 8 of the photo perspective of public art in Davis. For all of you dog lovers, be sure to read G.J. Caulkins column this month.

The August 2008 issue includes stories on Davis's new mayor, Ruth Asmundson, Capay Fruits & Vegetables and their Farm Fresh to You program, home design, recipes with gorgeous photos from their new food contributor, Cathy P. from noblepig.com, the Nugget Bakery, Strelitzia Florist, Janet Berry and the Dollar a Day campaign, the UC Davis Large Animal clinic, hometown girl Christi Raycraft who was named by the Aggie as UC Davis' female athlete of the year, a restaurant feature and review on Hunan Restaurant and Bar, Jack Plasterer who is trying to bring arena football to the area, Puparazzi and more columns on suburban life in Davis, student life and Davis events for August.

An upcoming issue apparently features Armstrong and Getty, who (jokingly) wondered on air if the DLM photographers in studio might be from Neo-Nazi Weekly or NAMBLA Quarterly. They were relieved when they found out they were from Davis Life Magazine, which they then called "a fine, fine publication".

The November 2008 issue featured Jack Armstrong from the popular radio show, Armstrong and Getty on KSTE, restaurant feature and review on Aioli Bodega Española, the historic Stevenson Bridge, the UC Davis Aggie football team, Davis Double Deckers women's alumni rugby team, Faces of Tomorrow, John Natsoulas and his gallery, Tree Davis and their free shade tree program, some of Davis' local heroes that saved lives and were honored at the Red Cross heroes luncheon, making sushi at Kim's Asian Mart, the Farm to School program going on at some of our public schools, a holiday recipe from Cathy P of www.noblepig.com and columns by Gordon Caulkins, Alexandra Popken and Laura Cole-Rowe, not to mention Davis dogs in the Puparazzi section.

Just introduced is the first phase of a "new and improved interactive" version of the magazine. Besides the wonderful monthly features, you can now blog about each story, ask questions and interact with the writers, photographers and subject, Vote! on a fun competition each month and search for past stories by names or subjects. It's a great way to access their library besides reading our archived issues. This month, the Vote! features Valentine's drinks by five local restaurant and bartenders from Bistro 33, Uncle Vito's, Cafe' Bernardo, Seasons and Sophia's. Go online to vote for your favorite now. The drinks will be available in the participating restaurants for the month of February. Other features include: Davis love stories told in the words of Davis couples, Davis Aquatic Masters, Konditorei and their wonderful desserts, Davis resident and producer/subject of The Breast Cancer Diaries, The Love Lab on campus, love and intimacy research with Dr. Phillip Shaver, the Davis Food Co-op teaching kitchen, wonderful columns and recipes, and more.

The July 09 issue features our new real estate and property management sections, a one-stop shop for finding a home for sale or rent in Davis. In July we're also featuring and reviewing Mikuni, and have wonderful stories and photos on 88-yr-old newlyweds Bob and Margaret Stevens who met and fell in love at Atria Covell Gardens, the Yolo Basin Foundation, The Fitness Garage, Tanya McKay — one of the victims of the Woodland dentist, part one in a tour of UC Davis, the Bohart Museum of Entomology, The Davis Cricket Club, a home remodel of a Craftsman bungalow on F Street as well as our Puparazzi and columns.

The August 09 issue is now live and include great stories about Whymcycles, bank robberies in Davis, the new baby/parent group at Mother and Baby Source, ArtFarm with The Art and Ag Project, Community Gardens, UC Davis brewmaster Charles Bamforth, a campus tour, the owners of Zia's Delicatessen and a review of Zia's, a College Park home design feature plus recipes, dogs around Davis, columns and our new real estate and property managment and rentals section.

Our September 09 issue offers the following features: A guide to the Happy Hours in Davis, our wonderful trees, the Relay for Life fundraiser, a guide dog puppy and her 14-year-old trainer through the Davis group, Eyes For Others, the UC Davis Meat Lab, UC Davis campus tour, part 3, a story and restaurant review on Plainfield Station, a homebrewing group The Merry Growlers, an incredible modern home, The Well House, on Bermuda Ave., another great recipe by Cathy P from NoblePig.com and columns from our talented columnists, G.J. Caulkins and Jenny Chaussee. Don't forget to visit our new real estate and rental sections.

Our January 2010 issue features some of our favorite past stories on subjects such as, Michael Franti of Spearhead, Skydance SkyDiving, Betty Lewis who has lived her entire life in Davis, bee farmer Mike McDonald, UC Davis Men's Rowing Team, the UC Davis Love Lab, a hamburger review including Redrum Burger, Burgers and Brew, The Graduate, Ali Baba, Seasons and Cafe Bernardo. Other stories include a recipe for Chocolate Lover's Cake by Cathy P, columns by G.J. Caulkin, Mark Ling and Jenny Chaussee, Puparazzi and a modern home design piece on a house on Redbud Lane in South Davis.

Don't miss our April 2010 issue of DLM, our last monthly edition. Starting May 1st we'll be changing formats and will feature daily content about Davis with wonderful photography and great photos. In our April issue we have stories about Jaymes' Fat Face gourmet popsicle and "sammich" shop, Rodness Martial Arts Center, Rockband University, UC Davis's Aggie Pack, The ARC, [Uncle Vito's Slice of N.Y."] (a feature and a review), puparazzi, a recipe, a home design feature and several columns.

2008-08-02 07:24:08   We will have Phase II of the magazine completed in November with lots of changes to make the site more interactive for the community including message boards, blogs for each section, a place for the community to upload their event photos, a living section for the community to celebrate engagments, weddings, birthdays, etc., and much more. RSS feeds are in our plans as well. Stay tuned! —CaryArnold

2010-11-12 23:29:47   DLM posts huge numbers of links on the Wiki, most of which are now defunct. I just got done removing more than 40 such links—the dead ones, with only about 20 working links still existing. Unfortunately, this is just the latest of several such efforts; another 120 or so dead links were already removed in the past 4 months. —TomGarberson

2011-10-01 15:17:07   I would like to apply to be the interviewer for the dog page you used to have that interviewed Davis dog owners about their dogs. —ElizabethBarthel