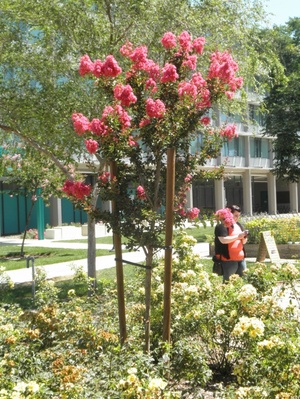 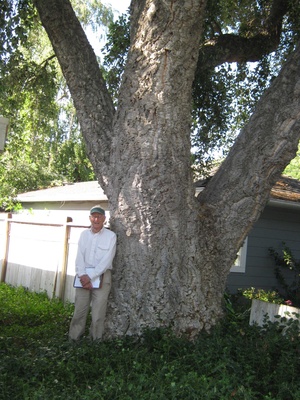 There are many different kinds of trees in Davis. They make up an important part of the town flora. In addition to fruit trees, almond trees, olive trees, and the Avenue of Trees, we have other "trees" such as The Trees Apartments and other apartments named after trees, and a Dollar Tree (which unfortunately isn't where money grows).

Davis is included as one of over 500 cities with the distinction of being (currently) named a Tree City USA by the National Arbor Day Foundation. Of the 152 in California, Davis is in the top of of the oldest having the honor for 34 years (beat out only by Sacramento and Burbank at 35 years each).

There are some species of trees that you will see in Sacramento but not in Davis, primarily due to the salinity and pH of our water. These include Flowering dogwood (Cornus florida), Sour gum (Tupelo, Nyssa sylvatica), and Sweet gum (Liquidambar; there are a few around town, mostly unirrigated)

You can also climb trees, visit The Nut Tree, and during the Christmas season, you can view holiday tree lighting occasions. On occasion you can find things in trees.

Shown below, right: Dr. Milton Hildebrand, a 1973 Distinguished Teaching Award recipient standing in front of a Cork oak ('Quercus suber') he planted from a one-gallon container in 1949. Shown in 2010.

Landmark trees are protected specimens that are singled out for being unique, historical, or in some other way exceptional. The City of Davis maintains an official list, and we should try to document at least some of the trees on the historic places entry.

What makes an ideal tree for home landscaping is a matter of opinion, but some important features are the following:

If you own property, you may be interested in Tree Services.

Obviously, some of these attributes are in direct conflict. It all depends on what you want.

Davis has an Urban Forestry Program which manages all the street trees (13,000 of them) and the trees in parks and greenbelts (another 5000). One important feature of this, as far as homeowners are concerned, is that the City has say over what kinds of trees can be planted in the public easement zones along the streets, i.e., in the mow strip. In particular, in mow strips you can only plant a tree from the official Master Tree List, downloadable from the Urban Forestry Program web site. If you want to plant any other species you need approval from the City Arborist. The Urban Forestry Program also provides a limited selection of free trees to homeowners, on the rationale that trees create shade that will decrease energy bills.

Following the passing of Measure D, The city's remaining tree crew was laid off. These are the employees whose job it was to remove tree branches that had fallen. Given that the city is directly responsible and liable for 18,000 trees, this is an important and relevant task that must occur, and the city's plans for future tree maintenance and care is unclear. The employees laid off often worked late at night or on weekends, because trees are notorious for not sticking to business hours.