A number of newspapers, newspapers, magazines, zines, and newsblogs are a part of the Davis community, many based in Davis and others based in Dixon, Sacramento, and Woodland, for example. This listing is an attempt at cataloging such publications.

Davis residents have several choices for local media. Sometimes even this wiki feels the need to run a Breaking News banner. In addition, a quirky college town like Davis gets national news coverage fairly often. From radio talk shows to magazines, the media loves Davis. However, the best way to get local information and entertainment is to go with one of the many local sources listed here.

Some businesses show or distribute their publication(s) in their stores. 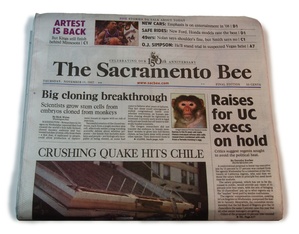 Television Stations receivable in Davis. The various stations come in as different channels based on which service (dish, cable, over the air) you use.

Note: The following channels are accessible through the given cable channels or channel 99 on ATT U-verse (which leads to a sub-menu of all three). They are currently unavailable through satellite television providers: