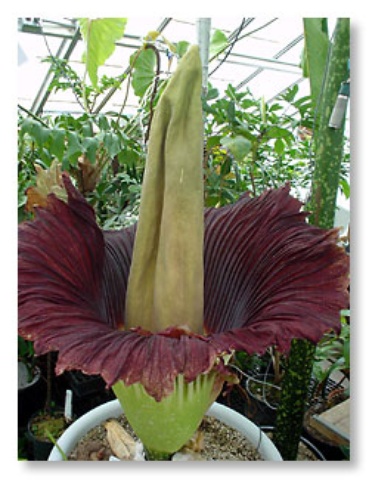 Ted the amorphophallus... you do the translation.

Tabatha is a Amorphophallus titanum, otherwise known as "Titan Arum" or "corpse flower". She grows and blooms in the UC Davis Botanical Conservatory along with campus' many other A. titanum plants and is tended by curator Ernesto Sandoval. Tabatha passed to plant heaven after complications of seeding, however her siblings are very much thriving especially the "timely" Ted and possible bloomer Tammy.

Their single bloom is famed for both the smell (a festering rotting stink) and size (the 2004 bloom was 60.5 inches, or over 5 feet). Tabatha last bloomed on Aug. 13, 2004, the second bloom for UC Davis, drawing over 4,000 visitors to the Botanical Conservatory to view (and smell) her single flower; in June 2003, ten-year old Ted the Titan bloomed and stunk, and bloomed again in May 30, 2005 when he was at visiting the Conservatory of Flowers in San Francisco. On May 7, 2007, Ted bloomed again at UCD beginning at 1:00PM. CSU Chico 's Corpse Flower happened to bloom May 29, 2007 — just 22 days after Ted. Ted bloomed again on June 23, 2011. The greenhouse will be open until midnight Thursday and 9pm Friday.

While Ted is in bloom, the UCD greenhouse is open late. Please take in Ted's odor but do not touch him.

Titan arums are native to Indonesia, where they're called bunga bangkai, and are technically an inflorescence or flowering stalk made up of lots of tiny flowers packed onto a phallic column. The plant is pollinated by flies and beetles, hence the odor of rotting flesh. The arum family counts among its members calla lilies, skunk cabbage, jack in the pulpit, voodoo lilies, and dragon lilies. Bunga bangkai are serious about getting pollinated, mocking the color, smell, and temperature of rotting flesh. The increased temperature helps spread the odor and encourages the cold-blooded flies to linger a bit. Luckily, because of Davis' subtropical climate, many arums can be grown either indoors or outdoors.

In addition, those in the Washington, D.C. area can see another of these stinky flowers, currently blooming. 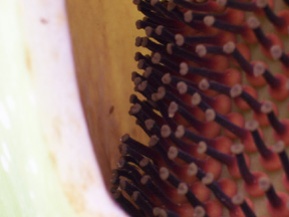 Inside a very stinky Tabatha

Ernesto points out to observers that Ted stinks to high hell!