The west side of Toomey Field 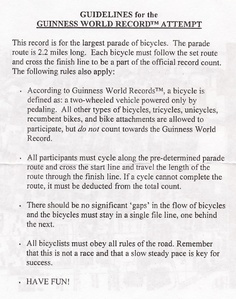 Sweet victory and bitter defeat occurred in 2007 for the bicycle enthusiast in the City of Davis. On March 3, 2007 the UC Davis Aggie Pack with help from the City of Davis orchestrated a successful attempt to break the world record for Largest Bicycle Parade. With an unofficial count of over 900 bikes and an official count of 822 bikes, the previous record of 641 bikes was broken. Unfortunately by the time Aggie Pack organizers received the Guinness Certificate of Authentication the record was already broken by Taipei City, Taiwan with 1,901 bicyclists.

The 2007 event was generally considered a success. With limited budget and time the Aggie Pack was able to effectively organize the event under Guinness specifications. The meet time for the event was at 3pm at Toomey Field. The 2.1 mile route zig zagged through campus and ended in front of the ARC Pavilion. The record attempt was part of a promotion to advertise a UC Davis Men's Basketball Game that evening and to encourage greater relations between the City of Davis and campus.

A "Sacbee" story says the Davis attempt at 3PM on Saturday, March 1, 2008 at Aggie Stadium fell "shy" of breaking the world record for "World’s Largest Bicycle Parade!" In 2008, the Aggie Pack was more organized by attempting to promote to a greater percentage of Davis residents. The goal was to CRUSH the record with over 5,000 bikes, but fewer than 1,900 showed. Even after last-minute "mass text messages, a cell phone campaign and a run through the freshman dorms" the attempt fell short of Taipei City's record. Unofficially, the event attracted 1838 people which was less than a 100 shy of the record.

Rules for the Events

The rules as established by Guinness are simple:

Filling up the track

Riders grow antsy waiting for the parade to start

Passing the Bike Barn other riders visible in the distance 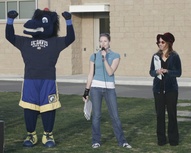 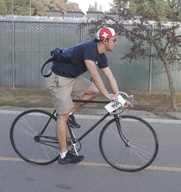 Wiki riders in the midst of the crowd

2007-03-04 01:18:32   The publicity on this event sucked ass. I'm surprised and impressed that Aggie Pack pulled this off. I was impressed to see a large number of townies at this event. I think that cellphones had a lot to do with the large turnout. One one had, 900 is impressive, on the other hand, come on, this is Davis. Is 900 the best we can do? Also, having us ride single-file was bullshit, we should have been allowed to leave two or three wide. —ArlenAbraham

2007-03-04 07:50:51   As someone who was towing a trailer I was a little annoyed that due to Guinness standards I was not longer considered to be riding a bike and as such didn't have a number. So keep in mind that in addition to the Guinness total that there were several people with trailers who were not counted. One additional set of publicity that may have brought out some of the townies was that this event was mentioned at the bike event at the Varsity the other night. —JasonAller

2007-03-04 12:30:49   I saw it in the enterprise myself, but confirmed via the wiki, of course. Kind of low on the fun scale, but it had to be done, right? Seems like the aggie pack had the resources at their disposal, so good for them. I did like how someone had ridden over the signs along the route. A wee bit of chaos in an otherwise pretty controlled event. That and the jocks yelling "USA! USA!" was pretty funny. -#117 —JeffShaw

2008-01-30 02:49:20   As far as I heard it's still Taiwan. Unless Budapest went through the process and specifications of Guinness, it doesn't count. There are strict rules about what constitutes a parade and making the count official. —ChrisPerry

Guinness has no more claim to arbitrating what constitutes an "official" world record than the Sultan of Brunei.

I applaud the sentiment ... except the part about "important": this felt pretty trivial. There need to be rules, but the rules have little to do with alternative transport. The tie to the Athletic Department ... is only a source for the necessary labor to pull off this event (as in, we're not athletes, and I don't want a ticket to the basketball game — although it was a nice gesture). They're saying this is an annual event now, and I would guess it was my final participation. —DougWalter

2008-03-02 13:10:12   The Aggie Pack tried everything they could within their resources to reach out to as many Davis residents as possible. If that includes allowing all participants of the parade into a basketball game, then so be it. If this record is to be broken, we'll need the support of as many Davis cyclists as possible. And if anybody else has any possible resources to tap into, I am sure that would help benefit the cause. —tlongman

2008-03-02 14:43:11   I think and would hope that the people of Davis could muster a more effective/attractive way of promoting bicycles and the bike lifestyle, than via a bike parade whose main objective seems to be to attempt to break some world record. The parade, as far as I know, neither does nothing to encourage biking among the general population, nor does it advance the bicycle infrastructure of Davis, or of any other city. As a side note, I don't think it's reasonable to expect a competitive parade turnout in Davis, when Taipei has a population of >2 million. —LeonardMarque

2008-03-02 17:02:57   In response to the comments that the bike parade doesn't promote bicycle use: I had several friends come from outside Davis to ride in the parade. After dusting off their old bikes that were in the garage for years, they said they were going to try to bike more. That's not to say that they are suddenly going to ditch their cars in favor of bikes, but it got some people thinking about biking more.

I do question the need to have us line up AGAIN after the parade just to turn in our sticker, walk though the basketball pavilion, and sign some banner. It might have been more efficient (and less paper wasted) if we could have returned the stickers outside at several locations and gotten a game ticket if we had wanted it, not just because we had to. —MicheleTobias