There are many nerds in Denton. This is how they live. 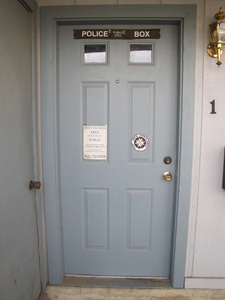 A door on Fry Street, fashioned after a Doctor Who time machine.
Undoubtedly the work of a nerd.

Reddit has an active Denton community, with both UNT and Denton subreddits. See here for more.

Time Lords of Denton is a facebook group uniting the Doctor Who fans of Denton in hopes that one day they will all gather and have an awesome drunken nerd-gasm.

Mu Epsilon Kappa is the anime and Japanese Pop Culture organization at UNT. Aside from anime screenings, MEK takes part in community service projects, intramural sports, and an array of other nerd-oriented activities.

Animanga is an after school program for teens in grades 6-12 who are interested in anime, manga, and art. Meetings take place every third Wednesday 6:30pm to 8pm each month at the Denton North Branch Library.

Favourite study spots near UNT include Big Mike's Coffee on Fry Street, and Banter on the square.

Discovery Park is one surefire place to find nerds. Again, libraries are also pretty much guaranteed nerd hangouts. (Because nerds read. For fun.)