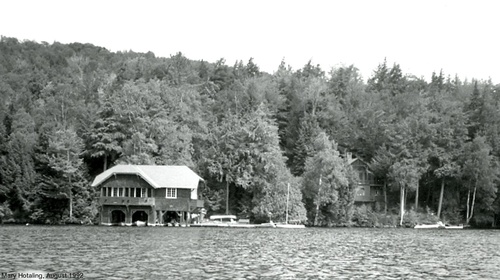 Camp Forestcraft is a youth camp based in an historic "Great Camp" complex on Upper Saranac Lake operated by Dr. Ted Blackmar from 1948 to at least 1994. 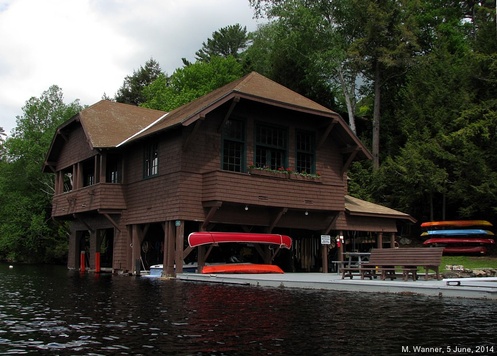 Camp Forestcraft boat houseThe land it was built on was part of the Howell Tract. Then the property was owned by a Meagher, followed by John Robertson Dunlap. Dunlap's grandson, Lewis Spence, wrote, "Long before he built Woodwil in the 1920s, he had built another camp, Camp Arodasi (Isadora spelled backwards), on Upper Saranac in the early 1890s, just when the lake was beginning to gain a reputation as a summer resort. Here he raised his three children, only to sell the place immediately following World War I." He added, "In order to supervise construction of the Gilpin Bay camp personally, Grandfather had housed his family in a tent that first summer. As so often happens in the Adirondacks, it rained the entire season. In the cold and wet, with primitive camp cooking and perpetually damp clothes and blankets, Mother contracted a feverish cold that lingered for weeks. Later that year that cold was diagnosed as rheumatic fever, a disease that permanently damaged her heart." Spence also wrote that Matt Otis, the guide at the Gilpin Bay camp, was "highest in Granfather's esteem." By 1926 he had begun building another camp called "Woodwil" on the north part of the lake. (See Sources, below.)

John Henry Kirby, a Texan, apparently owned this camp from 1920 to 1947; he called it Dixie Pines. He founded Kirby Lumber Company, along with many other interests. Kirby established a railroad in 1896 from Beaumont, Texas, 100 miles north through the piney woods to be able to transport lumber products to Sabine Pass, Port Bolivar and the connecting Houston rails. He built or purchased and operated seventeen producing lumber mills in east Texas and their short line railroads, between 1900 and the mid-1950s. He had interest in the oil field exploration in the Beaumont and east Texas areas.

Mr. Kirby and his wife had one child, Bessie Mae. In November of 1906 in Houston, she married a man named James Schuyler Stewart from Amsterdam, Montgomery county, New York; he was born in New York State in June of 1878. He and his family were in some sort of textile manufacturing or importing business (perhaps the rug business, as Mohawk Carpets are located there). He made several trips to Cuba, probably buying textiles. He died in the fall of 1911 before his second children were born in February 1912.

An undated sales brochure from the Clinton J. Ayres real estate company describes Dixie Pines Camp as "A gentleman's estate in one of America's greatest playgrounds." "Location: The approximately eight acres have a frontage of some six hundred feet on the west shore of Upper Saranac Lake in the Adirondacks. At this particular location, the shore line curves to the east around Gilpin Bay, so that the camp has the advantage of a desirable Southern exposure." "The accommodations may be summarized as follows: 19 buildings in all. 9 buildings for owner and guest use, including 2 sitting rooms, 2 dining rooms, 1 combination living and dining room, 15 master bedrooms and 12 master baths. 9 service buildings, containing 3 living rooms, 11 bedrooms and 3 servants' baths (exclusive of caretaker's cottage)."

One or perhaps two Rosenbaums — also involved at nearby Camp Pinebrook — were apparently owners after Kirby.

Ted Blackmar owned and operated Camp Forestcraft from 1948 to 1989 as a small expedition camp. Camp Forestcraft offered children 12 to 16 years the opportunity to make decisions for themselves: there was no regimen such as archery, crafts, etc., but weekly camping trips into the woods, the mountains, lakes and rivers. Rich Kraft was the the manager of buildings and grounds for many years.

Dr. Blackmar died a few years ago, but in the last year or two the camp has reopened under the care of former campers. See the Forestcraft website.

The 50th wedding anniversary of Mr. and Mrs. Abel E. Blackmar of Scarsdale and Litchfield, Conn., will be celebrated June 25 at Camp Forestcraft, on Upper Saranac Lake, the camp of their son, A. Edward Blackmar, M. D.

For five generations the Blackmar family have been devotees of the Adirondacks and some of them have been here for part of every year since the 1870s.

Guests at the anniversary celebration will include their entire family and a few intimate friends. They are Mrs. Anne Bixby of Potsfield, Dr. A. E. Blackmar of Lawrenceville, N. J., Mr. and Mrs. Robert Pully of Round Up, Mont., Mr. and Mrs. Bengt Ohman of Glenhead, L.I., Dr. and Mrs. B. Hill of Altadena, Calif., William H. Hill of Trenton, New Jersey, Mr. and Mrs. Philip Hill, Jr. of Scarsdale, Paul Bernard of New York City, and ten grandchildren.