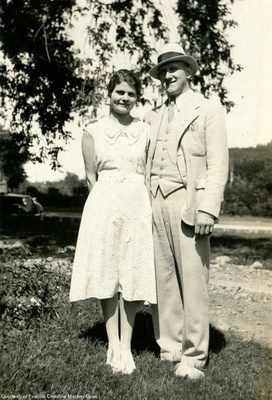 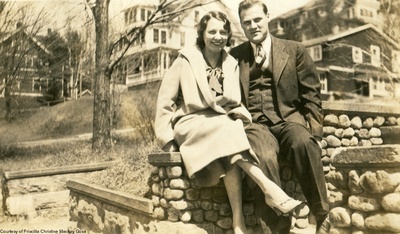 Cousining was a term used in the area to refer to romances that developed, usually between patients, in the course of the tuberculosis cure. A gazebo at Trudeau Sanatorium was known as the "cousinola". 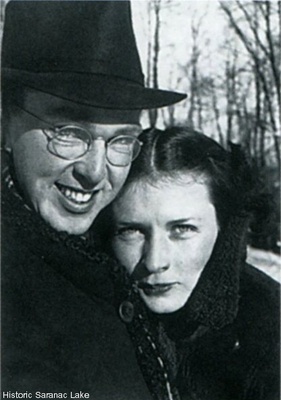 Dick Ray and his "cousin"

"Cousining" was the Trudeau terminology for a close friendship between a female and a male patient.. I thought of it as a goal to reach as soon as I could get well enough to get down the hill to meals and back up again without exhausting myself. By the time I had been at Asiel for two days, I was permitted to go to the dining room for one meal and within a short time was up for all three meals. When I finally was up-graded to a level of activity allowing me to walk for 15 minutes twice a day it was cause for a celebration and I managed to take a walk with table-mate, Sid Pollack. We strolled out along the road to the Little Red and although it was hardly a romantic occasion, I had a feeling that maybe life was looking up.

I was delighted by this tradition of cousining and spent almost the entire nine months trying to establish a relationship with a New York girl of some sophistication and gusto who seemed as interested as I but through a series of unfortunate coincidences we never seemed to be able to achieve "up" status at the same time. I would be sick, she was doing well. I recovered just as she took to bed with fluid. At one time my dad visited for a weekend and spent a good part of that time visiting her, carrying notes back and forth and he ended up smitten with her - "She is a peach of a girl !" I remember telling him I valued his appraisal since he had such an eye for beauty and quality in women as to choose my mother for his wife.

My cousin-to-be and I met within a couple of weeks after my arrival and soon both got passes to go out for a movie and dinner with a stop at Downing and Cane's for something alcoholic to speed the process of mutual discovery. After which we came back to the sanatorium in a cab through the snowy night - and since she was on a more vigorous exercise program than I, she took me home. I invited her in and insisted that she was welcome to share our Asiel accommodations for the night, but she insisted right back that it would be very wiser if she kept her overshoes on and took them off in her own cottage and let our temperatures return to normal.

Shortly after our passes, I found myself in hospital for an appendectomy and what with one setback or another never managed anything more intimate than some walks along the road to town, but I had only banked the fire in my furnace; it didn't go out. I carried a sputtering torch for some time.

Many a sanatorium romance led to marriage, including...