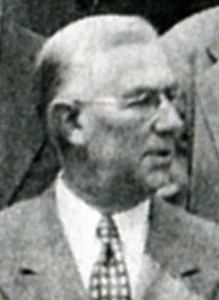 Married: Mary Bissell Betts, one of the earliest occupational therapists

A brick at the Saranac Laboratory has been dedicated in the name of Edward Packard, M.D. by his son, Dr. John Packard.

Dr. Edward Newman Packard, Jr. was director of Trudeau Sanatorium. He was physician to baseball great Christy Mathewson. He lived at 333 Park Avenue, a few doors from the Christy Mathewson Cottage.

Dr. Packard graduated from Syracuse Medical College in 1909 and was elected to Alpha Omega Alpha, the national medical honor society.

You, no doubt, have heard about the meeting of the Thoracic Surgery. It apparently was very successful. They had a very good program and the men were very well entertained. . . . Ned Packard took a party up White Face. He had had a pain in his stomach since the morning. On the way up the pain became so bad he tried to vomit but that did not relieve him. After he reached home he took caster (sic) oil and an enema. A blood count showed 9000 leukocytes. He had a wretched night. The next morning his leukocytes were 25,000 and his abdomen was exquisitely tender. They operated and found a gangrenous appendix. Yesterday he was coming along all right though Ed Welles was still anxious. I have just heard he had a better night last night so I imagine he will pull through all right.

With you away, him laid up and John Hayes in Europe, we certainly are crippled.

Dr. Edward N. Packard, one of the chest specialists who practiced in Saranac Lake at the height of the tuberculosis treatment era here and director of Trudeau Sanatorium from 1946 to 1950, died Saturday in Pensacola, Fla., while visiting his son, Dr. John Packard. He was 85 years old.

Like a number of the other doctors, Dr. Packard first came to Saranac Lake— in 1912— as a patient and after "curing" returned after only a few months to devote his life to the treatment of tuberculosis.

His work here as an associate of Dr. Lawrason Brown was interrupted by service in the Army in World War I for two years. He returned again to Saranac Lake in 1919 and married Mary Betts, whom he had met in New Haven, and began a private practice.

War took Dr. Packard away from Saranac Lake again from 1941 to 1946 when, as a lieutenant colonel, and later colonel, he was medical chief of the Fort Dix and Holloran General Hospitals' 6,500 beds for which he received the Legion of Merit.

After the war he was consultant in tuberculosis to the Veterans Administration and director of Trudeau. His gentle kindness and his ability as a raconteur made him a favorite of the patients and staff. When he retired from Trudeau, 250 persons attended the party in his honor.

After his return to private practice, he acted as a consultant to Will Rogers Hospital, lecturer at the University of Vermont Medical School and director of the Saranac Lake Rehabilitation Guild.

He was a member of the Saranac Lake School board for ten years, and its president for two, and served as vestryman and head warden of the Church of St. Luke the Beloved Physician.

He was the author of a book on pneumothorax, of a number of chapters in other books, and of articles for medical magazines. He also is credited with being an early observer of certain phenomena associated with the interpretation of x-rays.

In 1906, Dr. Packard received his bachelor's degree in philosophy at Syracuse University where he was for four years stroke of a championship crew. He has been described as "one of the greatest strokes of all time" and for years one of the Syracuse shells bore his name as does the boathouse there. Dartmouth College has a Packard Trophy awarded each year in his honor. In 1960 he was named to the Rowing Hall of Fame.

Dr. Packard's father was the Rev. Edward N. Packard, a Congregational minister. He was born in Dorchester, Mass. and spent his early life in Syracuse where his father was pastor of Plymouth Church.

The funeral service will be at 11 a. m. Tuesday at St. Luke's Church in Saranac Lake. Burial will be in May in Pine Ridge Cemetery.