The many bed-ridden and ambulatory patients living in cure cottages and sanatoria in T.B. days generated a great deal of laundry. Trudeau Sanatorium had its own 4,800 square foot, one-story, laundry building, built in 1914-15. While some local women took in personal laundry for more careful washing at home, a number of commercial laundries washed and disinfected the mountains of bedding and towels used by patients. As many as three large, commercial laundries were active in the 1920s.

The Troy Laundry on Sumner Place, founded by Lemuel B. Magill in 1909, was the largest and longest lasting of at least three commercial laundries active in Saranac Lake. The building is still standing, but has been substantially altered for other uses.

The Silver Laundry merged with the Troy Laundry in 1956; after the merger, it was the only commercial laundry operating in the town. 3

On the evidence of the laundry slip posted here, Hayward's Laundry on Woodruff Street began using old laundry lists from the Troy Laundry, so they may also have merged at some point. The Hayward Laundry buildings were replaced in the late 1970s or 1980s by the Adirondack Bank's drive-in branch. The Silver Laundry is no longer standing. 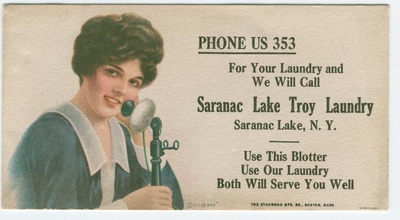