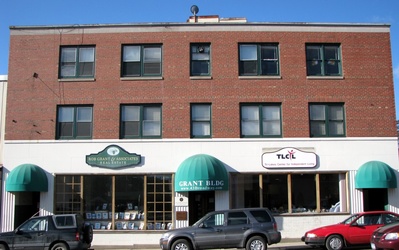 The Thompson Building, just outside the Berkeley Square Historic District, was erected by Alexis Thompson, one of the regulars at Downing and Cane's at their original location; it was the last multi-purpose commercial structure built in downtown Saranac Lake. It was the home of Tuffy's Tavern in 1948, and later the popular restaurant Downing and Cane's was moved here after George Downing's death in 1954.

He renovated a large, old cure cottage on Lake Street, called it the Eagle's Nest, and had his team (Philadelphia Eagles) training for several summers on the Petrova Avenue athletic fields.

"He loved Saranac Lake," Bill McLaughlin remembers. "There's no end to the good he would have done for this town if people hadn't abused him."

Alexis Thompson was rich and generous, and many an unscrupulous opportunist took full advantage of his unwariness. One of the last times Irving Altman saw him, "He was in Downing and Cane's, surrounded by parasites. He didn’t seem to understand that these people didn't care about him — they just wanted his money."

Finally, after one particularly outrageous deal involving a team of Huskies in Lake Placid, a cruel dawning came to Alexis Thompson; and he left the area he had so loved, never to return. When he died, he died alone in a hotel room — broke.

In the late 1970s, Blue Line Sport Shop was located in the right-hand storefront.

As can be seen in the photo, as of August 2009, the name on the awning has been changed to "Grant Building." The building contains ten residential units.

On July 13, 2017 a Saranac Lake Village Walk of Fame plaque honoring the Philadelphia Eagles professional football team was placed on the front of this building.  Under the ownership of Alexis Thompson the Eagles held their pre-season training camp in Saranac Lake for three years from 1946 through 1948.