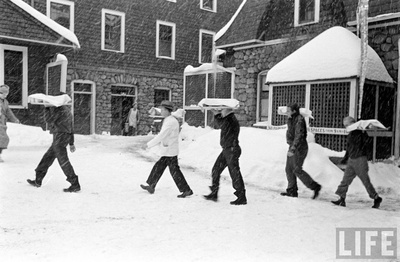 Tray Boys at the Trudeau Sanatorium, photo from Life Magazine, 1937, for personal non commercial use only. Tray boys (and tray girls) were local adults or, more frequently, school children, that were hired by the private sanatoria to deliver food to patients, often between buildings, as one kitchen would sometimes serve a number of sanatoria. A few of the cottages were operated in pairs, with one kitchen supplying two houses; sometimes the neighboring cottages were connected by a covered walkway. These connections are very likely all removed, but two examples were 74 and 76 Park Avenue and the two Werle Cottages at the corner of Church and Main Streets.

"Up through the early 1950s, school lunch breaks were an hour and a half long so that the boys who delivered trays (tray-boys) to the TB patients would have time to do their work and return to school." 1 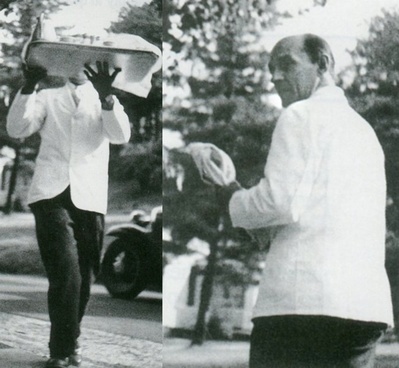 In Saranac 1937-1940: A Memoir, Dick Ray captioned these two photos "A camera-shy tray boy; but I caught him going away.

One interesting story involves Helen Bell, a tray girl who became friends with Alfred Larsen, one of the Norwegian sailors who were curing in Saranac Lake during World War II. They kept in touch by mail for twenty years; after his retirement from the merchant marine, Larsen returned to Saranac Lake and married Helen Bell, spending the rest of his life in the village. 2

Howard Riley was a tray boy. He mentioned it in his recent column about local restaurants: "The Top Hat Lounge at 81 Broadway, downstairs in the Potter Block at the corner of Bloomingdale Avenue and Broadway; I knew both owners, Abe Labas and Mike Volk quite well as they had cured with TB at 1 Pine Street, where I was a tray boy. The cottage was owned by Mrs. Margaret Gutshow, mother of John and Harry.

"As the story goes, when they were deciding to open the bar and restaurant, teetotaler Mike said to Abe, if we open this business together I want you to stop drinking. Abe quit and Mike started." 3

In a section of an earlier column, titled "The Gutshow cottages," Riley had also written about his experience as a tray boy: My first experience 'carrying trays' was at 1 Pine Street, a three-story cure cottage that filled that entire space at the corner of Bloomingdale Avenue and Pine Street. Next door at 71 Bloomingdale Avenue where the Ron Delair offices are today, was the second cottage owned and operated by the Gutshow family. There was no kitchen at 71 Bloomingdale; we carried the meal trays at 1 Pine from the kitchen, which was located on the back side of the house, close to and separated from the other house by a narrow driveway. The trays were placed on a dumbwaiter in the basement, which is where the side entrance led to, and a rope pulley lifted them to the other two floors. There were three floors at 1 Pine, and all the rooms were occupied. Most of the patients at that time were from the village of Whitehall. I would, with other full-time employees, carry the trays up to the rooms, go home next door to 5 Pine Street, eat my meal and go back and carry the trays down again. I did this three times a day, working the job into my school schedule. Remember, we had an hour-and-a-half off for lunch, so they kept us noisy urchins in school until 4 p.m. while the patients rested. . . . It seems strange in this day and age that our parents never worried about us getting TB. I handled dirty dishes from the patients and, with my friend Ed LaPoint, picked up dirty laundry from other cottages and delivered the clothes to Mrs. Allen, who did laundry at home. I was constantly in the patients' rooms brinign them cigarettes, candy and magazines from Reiss' Drug Store on Bloomingdale Avenue. . . . At 12 years old, it never occurred to me that cigarettes might be bad for their health, watching them hacking away as they lit up a Wings cigarette, which were 13 cents a pack. Chesterfields, Lucky Strikes and Camels had all gone to war. 4

The late Victor Willette and George Farrell were also tray boys. Reportedly, so was Red Plumadore, who contracted TB from his work as a tray boy. Walter "Bud" Duffy was the tray boy in the 1940's prior to Howard Riley at the Gutshow cottage. Jerry Cheney was a tray boy at Stern's cottage, 20 Helen Street. According to his 2018 obituary, Jack Lawless carried trays at the Spear Cottage on Riverside Drive.