Two of the outstanding events during the past ten days among the bay cities colored citizens were the Mardi Gras celebration held by the Louisiana Commercial club and the election of the first board of directors of the Linden Street Branch Y. W. C. A. The Mardi Gras celebration was one of the most beautiful affairs ever held by colored people in Oakland. The attendance taxed the capacity of Arcadia pavilion. It is of interest to the reading public to know why this affair was called Mardi Gras. This society is composed of former colored citizens of Louisiana. They are keeping alive the traditions of Louisiana by holding in Oakland every year this celebration. In Louisiana a whole week is usually given over to Mardi Gras which corresponds to the Fiesta of early California. All classes of citizens, the Louisiana Frenchman, the Octaroon and the Creole - each in his own particular group - participate in the festival. New Orleans is usually selected for this affair, the last day of which is featured by a street parade consisting of floats bearing costumed persons representing historical characters. Street dancing is indulged in, and at a night masquerade ball and pageant King Rex unmasks, and his queen is crowned, after which she unmasks. This festival ends on Shrove Tuesday, just before the beginning of Lent.

The Louisiana Society of the bay cities held its Mardi Gras festivities on Shrove Tuesday evening.

The other event of importance was the election of the first executive board of managers of the Linden Street Branch Y. M. C. A. Heretofore this board has served by appointment from the Central Y. W. C. A, and the eastern secretaries for colored Y. W. C. A. work. The organization is four years old. During the past year it has put forth every effort to become a branch instead of a center. Hence its first election of officers and membership dinner was a history-making event for the colored people of Oakland,

The following is an extract from the annual report of the executive secretary, Miss Ruth Moore: "The rapid growth of the Linden street Center Y. W. C. A, during the year is due in part to the vision of our general secretary, Miss Alice M. Brookman, and partly to the eagerness arising out of the community necessity for an organization with a Christian purpose and a practical place for colored women. The advisory board is the executive body of the Center. The splendid work done by the Linden Center Y. W. C. A. during the year has been due largely to the efforts and sacrifices of these women. The chairman of the Center is Mrs. Guy Ream Davis, [I think this might have been Susan B. Potter. - MF]  who has given her time and best thought to further the interest of the Center. It was the aim of the membership committee to bring the membership up to 200 active members by the end of the year. The present membership roll is 217, not including the 'Girls' Reserve' membership. Membership in the Linden street Center means to be a part in a progressive world organization and a chance to help other women and girls.

"This annual report does not cover all of the years' activities, nevertheless it is a report of sacrifice, of earnest endeavors and keen appreciation. In spite of misunderstandings that must of necessity come with a program so extensive and at the same time so new, it is to the credit of the women of this association that they have, figuratively speaking, stood to their guns and met the demands of the organization."

The following is quoted from the S. F. Western Outlook: "The Oakland League of Women Voters (white) are to act as hostess to the California League of Women Voters at their annual convention in May, at which time the election will take place. A committee of five, selected from the various clubs will nominate and present to the convention officials candidates for election. Among the nominating group is Mrs. Hettie B. Tilghman."

Mrs. Tilghman is one of the foremost colored women of the state. It was under her leadership as president of the State Federation of Colored Womens' Clubs that the colored women heavily invested in Liberty Bonds. During the World war she personally visited all the exemption boards around the bay cities and secured the names and addresses of the first colored boys to be drafted, and presented her list to the executive board of the N. A. A. C. P. of Northern California, which held a public reception for the first colored troops to leave for overseas duty. It was through her efforts that the Federated clubs sent Christmas boxes of cheer to the men in camp. She works for the advancement of her race in organizations and alone. She is a daughter of a distinguished California pioneer, Captain John Jones, who was closely associated with the late Senator Broderick of San Francisco. 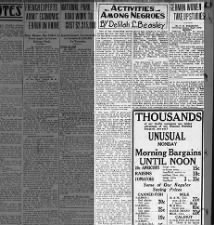