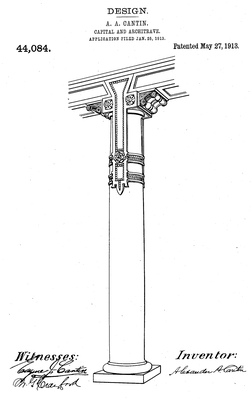 Oakland projects were mostly by A. A. Cantin and include:

Alexander earned his architecture license in 1901. He designed a number of buildings in San Francisco, the first permanent buildings for the College of Marin, and the Orinda Theatre. A. M. Cantin, while working at Miller & Pflueger, helped design the Pacific Telephone Building at 140 New Montgomery St. in San Francisco. "Of lifelong interest to him was the design of decorative columns. He was awarded patents for several of his column designs." 1

Mackenzie attended the school of architecture at UC Berkeley, graduating in 1935. He earned his architecture license in 1945, and the firm became Cantin & Cantin.

The Cantin family's remains are in the Chapel of Memories.