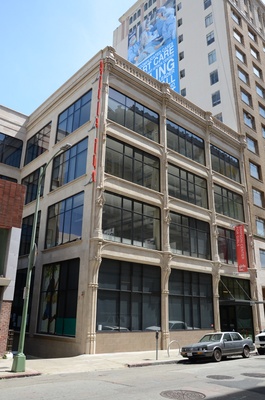 The East Bay Water Company Building is a Beaux Arts derivative - Gothic Revival office building designed and built for the East Bay Water Company  by architect William Knowles, The building, which opened in April of 1920, is located on 16th Street in Oakland, between Telegraph Avenue and San Pablo Avenue.  The original address was 512 16th Street, but sometime between 1920 and present day, the building's front entrance was relocated slightly east, and the building was given a new address of 510 16th Street. 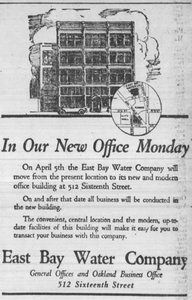 "This is a four story reinforced concrete office building, clad in buff terra cotta with skeletal articulation and rich stylized Gothic ornament.  The L-shaped plan has a light court on the left above a ramped driveway to a basement garage.  The three upper stories have windows framed by molded basket handle arches with embellished spandrels, piers with decorative elements including gargoyles, and a balustrade with flowing Gothic tracery panels and volute buttresses.  The remodeled ground floor originally had an ogee arched main entry in the center bay and show windows in the flanking bays.  Windows were originally Chicago style with decorated vertical mullions.

This building for the East Bay Water Company was part of a pattern of development of large, imposing Downtown Oakland headquarters in the 1910s and 1920s by the Realty Syndicate, Oakland Tribune, Pacific Telephone, Pacific Gas and Electric, and numerous banks.  Architect William Knowles was particularly noted for designs in the Gothic mode, a style first established in Downtown Oakland by B. G. McDougall's 1913 - 1914 Federal Realty Building at 1605-15 Broadway." 1

This historic building is #56 on the list of District Contributors for the Downtown Oakland Historic District Registration Form.