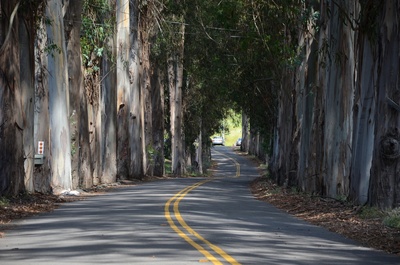 Eucalyptus trees are several non-native but pervasive species of trees native to Australia that grow around the Bay Area. Most numerous are the blue gum, Eucalyptus globulus. They are loved by some as trees providing habitat, and hated by others as fire hazards.

Love them or hate them, eucalyptus are found across much of coastal California. There are a number of stories about why eucalyptus were introduced to California: the railroads wanted lumber for railroad ties; developers like Frank Havens wanted them for lumber for construction (c.1910) Bishop William Taylor introduced them (c.1862). 3 While the latter 2 things definitely helped spread eucalyptus across California, they were introduced prior to these events. One frequently given source was in 1856 by William Walker of the Golden Gate Nursery of San Francisco, 1 though some sources credit (or blame) C. L. Reimer. But in California's First Fuel Crisis And Eucalyptus Plantings, 2 Gayle M. Groenendaal makes the case that it was clipper ship Captain Robert H. “Bully” Waterman in 1853, who planted them in Solano County.

Regardless, a few years later nurserymen around California, including Walker in San Francisco, R. W. Washburn of the Shell Mound Nursery near Brooklyn, and Stephen Nolan in Oakland were cultivating them for sale. 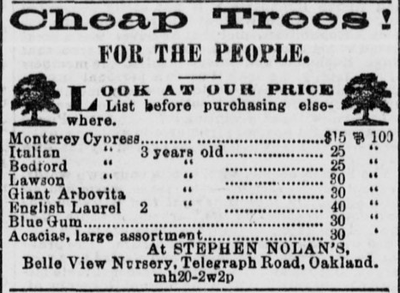 Part of the spread is due to Frank Havens' short-lived Mahogany Eucalyptus and Land Company, which planted thousands of eucalyptus in the East Bay hills in the early 1910s, but even august figures like Joaquin Miller planted eucalyptus in what is now Joaquin Miller Park beginning in the 1880s.

Part of their appeal is that they grow rapidly; California's Mediterranean climate is similar to Australia's, so they have adapted well. Unfortunately, E. globulus does not work well for construction lumber, as the wood tends to split as it dries.