In 1924, the company merged with Emporium of San Francisco, but the two operated largely as separate entities in different territories.

For many years [ not sure which, but starting early ], Albert S. Lavenson, father of photographer Alma Lavenson, was Capwell's business partner. 5 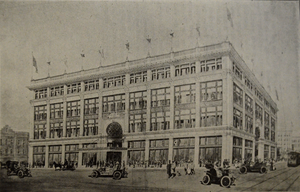 A large, four-story building was constructed in 1912 at Clay between 14th and 15th Streets. The store included a roof garden with an enclosed children's play area. Thousands of people came to the opening. The store included one of the first escalators or "traveling stairways" in a store in the west. 2

Plans for the building began in 1910, to replace the earlier Hotel Touraine. The building was designed by Charles W. Dickey. 7 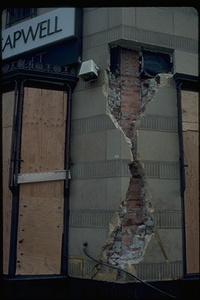 Loma Prieta Earthquake damage - photo courtesy Jo-Ann Ordano © California Academy of SciencesThe 1928 ground-breaking for the new building was a big deal, with thousands of people coming out for the event. Mayor John L. Davie turned the ceremonial shovelful of dirt, though the Tribune reported he had trouble getting a shovelful, which drew laughter from the crowd. Joseph R. Knowland, publisher of the Tribune, spoke and noted "the ceremonies carried unusual significance, because they marked the beginning of Oakland's 1928 building program and demonstrated the faith of men of keen judgment from other localities in Oakland's future." In attendance from Capwells were store manager L. F. Dinkelspiel, comptroller E. H. Furth, merchandise manager T. W. Sullivan, and son of the founder, C. E. (Cebert Edwards) Capwell. 5

The Beaux Arts-style flagship store of the H. C. Capwell Company was opened on August 5, 1929 at the corners of Broadway, Telegraph Avenue and 20th Street in downtown Oakland. The store remained Capwell's until 1979, when the parent company rebranded all of its stores with the awkward name Emporium-Capwell. The building was damaged in the 1989 Loma Prieta earthquake and closed for a time.

The work done to seismically retrofit it was not kind to the original design In 1996 the parent company was sold to Federated Department Stores and closed. The building reopened months later as a Sears store, which was the occupant of the building until 2014. The building was damaged during Occupy Oakland, and some of the windows were boarded up for a long time.

As of December, 2013, discussions were underway with Strategic Urban Development Alliance to purchase and renovate this building, but those talks fell through in April, 2014. Sears then entered into talks to figure out who the new developer would be [source]. On June 20, 2014, the San Francisco Business Times reported that the building had been purchased by Lane Partners, and that Sears would close the store within 90 days.3

In September 2015, Uber announced they will be leasing "a large swath" of the Capwell building.6 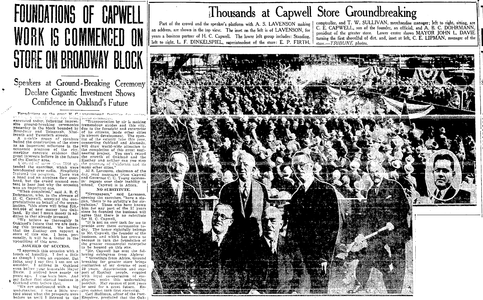 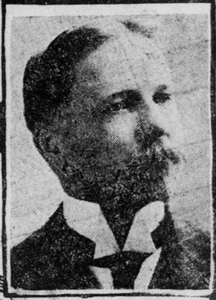