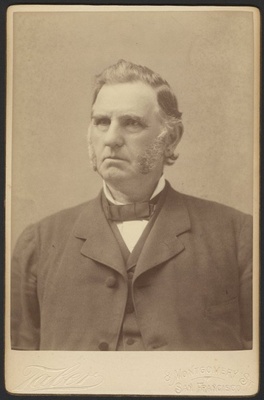 Josiah Stanford was born in 1817 in upstate New York in the town of Watervliet, the eldest son of Josiah and Elizabeth Stanford. He and his four brothers came west to make their fortunes during the Gold Rush period but only Josiah and brother Leland remained in California. Leland Stanford went on to become one of California's Big Four, a California governor, a renown horse breeder, and the founder of Stanford University. Josiah was a prominent and successful businessman and vintner, as well as, a trustee of his brother's university.

Josiah married Elvira Griffin in 1843 in Albany, New York where their daughter, Agnes, was born on September 23, 1846. By 1848 Josiah was in Sacramento operating a mercantile business serving miners. During the 1860's he was mining for oil in San Joaquin Valley. Using mostly Chinese laborers, originally hired by Charles Crocker to work on the transcontinental railroad, his operation completed an 80-foot tunnel on the south flank of Sulphur Mountain. Fifty-four tunnels were eventually dug by Stanford and others, most prior to 1892. At the time these tunnels produced more oil than any other method in California. The crude oil was shipped to another Stanford family enterprise in San Francisco where it was distilled into lamp and lubricating oils.

Elvira died in 1852 and in 1861 the widower married his second wife, herself a widow, Helen M. Barker in San Francisco. Their son, Josiah Winslow, was born on August 24, 1864. In the late 1860's Josiah took over managing Leland's Warm Springs ranch, just south of Fremont. Initially, Leland planned to bred and race horses on the property but when he decided to relocate to Palo Alto Josiah took over. Josiah planted grape vines and enlarged an existing winery creating the Leland Stanford Winery and a private country estate. By 1876 the winery was producing 100,000 gallons annually making it the second largest wine producer in the country, Eventually, Josiah Winslow (Joe) took over management. The winery is notable for being the first producers of California champagne.

In 1883 the couple purchased an Oakland home from Alice and William Camron at 1218 Oak Street, (today 1418 Lakeside Drive). The family split their time between Warm Springs and Oakland, spending more time in Oakland as Josiah and Helen aged.  Stanford died at home just seven years later in 1890. He was 73. The cause of death was stomach cancer. He is buried in Mountain View Cemetery His Oakland home remains as a public museum, Camron-Stanford House.