Lake Temescal is a man-made lake created by damming Temescal Creek in 1868.  The reservoir, which had once been nothing more then a sag pond, was built by Anthony Chabot's Contra Costa Water Company to provide the East Bay, including Oakland, with drinking water.  Chinese immigrants who came to work on the railroads provided the backbreaking manual labor for removal of the dirt and bedrock.  Wild mustang horses were run back and forth across the dam to compact it during construction. The derivation of the name Temescal is described on the the Oakland Wiki page for the Temescal neighborhood. 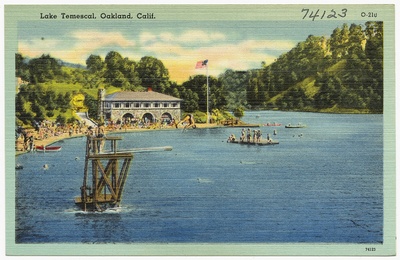 Lake Temescal in the 1930s-1940s. CC BY 2.0 by Boston Public Library,  The Tichnor Brothers Collection
The area was converted to one of the first three East Bay regional parks and opened to the public in 1936. The lovely stone beach house was built by the WPA in 1940. The beach house can be rented for special events, and behind it there's a patio and garden area that is frequently used for weddings and parties.

In more recent history, Lake Temescal has again been used as a reservoir. Not for drinking water, but to provide water for fighting fires. In 1991, helicopters used it for water to fight the Oakland firestorm. It was used in 2009 for water to fight a smaller fire on the other side of the Caldecott Tunnel.

The park is very popular with people from all over Oakland for picnics, hiking, and swimming. Unfortunately the water quality is frequently not the greatest, so check with the East Bay Regional Parks page for the latest before swimming.

In the late 1800's Bohemian artists and writers camped on the edge of the lake, including the painter J. H. E. Partington who after moving from Manchester, England to Oakland with his family in 1889, lived in a tent on the shores of Lake Temescal.

Spanning the eastern side of Lake Temescal was the Sacramento Northern train trestle, over which The Comet carried passengers. Sometime between 1936 and 1950 that arm of the lake was filled in. 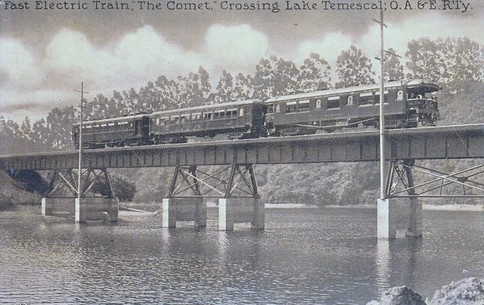