The Landvale Bridge was constructed in 1937, in conjunction with the construction of the first two bores of the Caldecott Tunnel, to provide access between Tunnel Road and the Montclair District.

Most of the bridge was removed in 1964, in conjunction with the expansion of the Caldecott Tunnel from two bores to three. A small portion of the south end of the bridge above Lake Temescal was retained, and was used as part of the on-ramp from Broadway to southbound Highway 13 until the Alameda County Transportation Authority and Caltrans rebuilt the 13/24 interchange, in 1999. For more historic photos of the area, see the East Bay Hills Project. This portion of the bridge is still in place, along with the former right of way for the now closed on-ramp, and both are visible in this aerial view on Google maps. 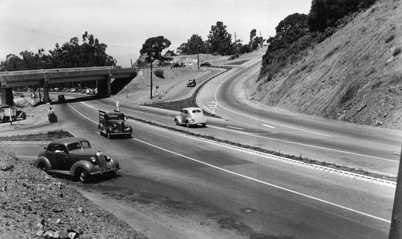 The remaining portion of the bridge can be seen from Temescal Regional Recreation Area, and with a bit of searching, you can even walk up on to it and view tons of colorful graffiti on the retaining wall. According to available title records, the bridge is still owned by Caltrans, so it is technically trespassing to go onto the bridge, but there are no fences or "no trespassing" signs preventing such access. 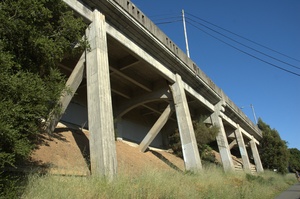 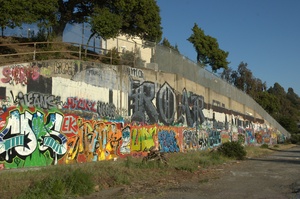 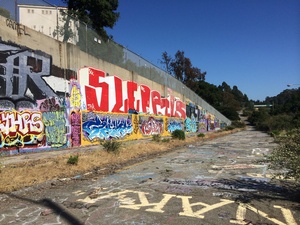