Wilma Chan Park (fomerly Madison Square Park) is a City of Oakland public park in the heart of Oakland's Chinatown. It was renamed for Alameda County Supervisor Wilma Chan in 2022 following her death in 2021. 1

The park has various fields and play areas. On most mornings the park is used for a variety of activities: Qi Gong, Tai Chi, Sword/Fan Dance, Taiwanese Dance, Line Dance, Stretching and Badminton. Many but not all of the participants are older residents of Chinatown. 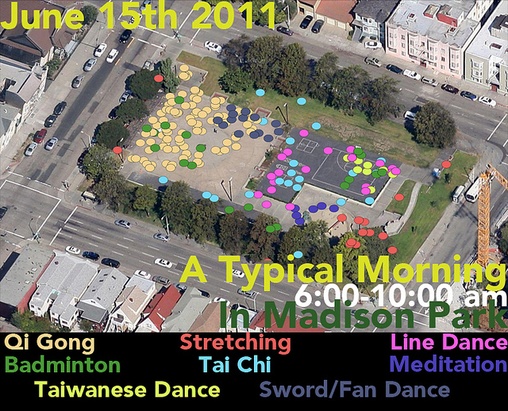 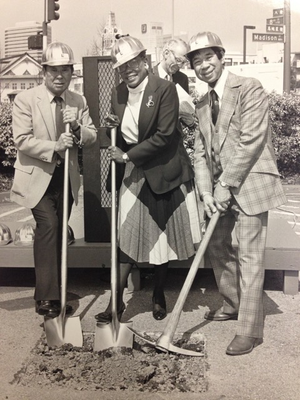 groundbreaking for new Madison Square Park, Frank Ogawa, ? and Raymond Eng.
Eng family collectionThe park was originally the next block over between Madison and Oak. In the 1960s, the park was moved for the construction of BART headquarters and numerous residents were displaced for that and other "urban renewal" projects around Chinatown. Initially the new park had no facilities, and was treated more like a lawn for the new BART building rather than a space for the community.

Ironically, the BART headquarters building didn't last. In 2004, BART moved its headquarters to the Kaiser Center, though the BART board continued to meet there until 2005. In 2006 the building was declared unsafe in the event of a major earthquake, and the building was demolished in 2009-10. See also the article on Caroline Square, which was what the original park was initially called. 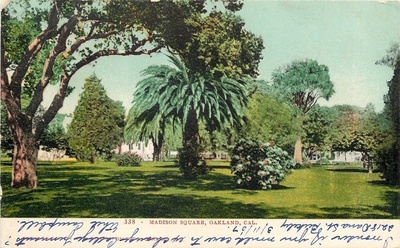 Apparently Madison Square Park has the Bay Area's Largest Labyrinth! It's the third one listed under Oakland in the Worldwide Labyrinth Locator. Using google Streetview, and yes, you can see the painted lines there. 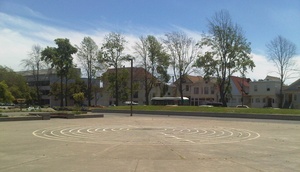