The Woodminster Amphitheater is an outdoor performance facility in the Oakland Hills' Joaquin Miller Park. Built as one of the WPA projects, the art deco amphitheater was designed by Edward T. Foulkes working with a team of designers. Some of the early design work was done by Howard Gilkey, who also designed the Cleveland Cascade. In 1976, Arthur Navlet explained that “Unfortunately, [Gilkey] was denied the pleasure of building it because he expected fabulous fees for his services.” The main architect was Foulkes, and the landscape architect was William Penn Mott, Jr. 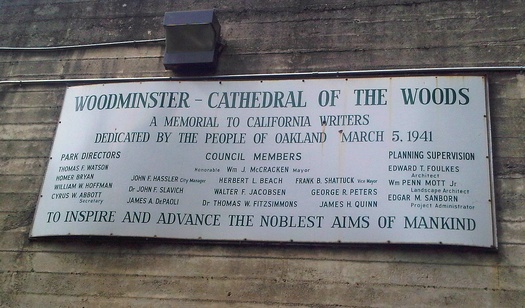 Woodminster - Cathedral of The Woods, March 5, 1941 Dedication sign (photo by himy)Dedicated March 5, 1941 as a memorial to California writers, the City of Oakland Parks Department started presenting musicals every summer at the amphitheater under the direction of John and Margaret Falls until their retirement at the end of the 1966 season. A great friend of the Falls family, Joaquin Miller's daughter Juanita had a special reserved seat to at any show she wished to attend. Members of the Oakland Symphony under the direction of Carl Kalash provided musical accompaniment. Since 1967 Woodminster Amphitheater and Cascades has been home to the Woodminster Summer Musicals. 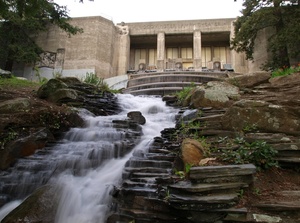 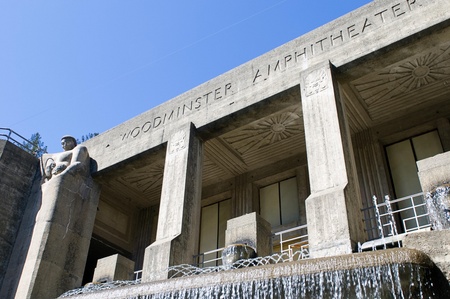