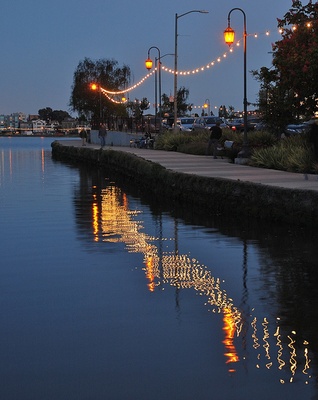 Necklace of Lights at Lake Merritt 1 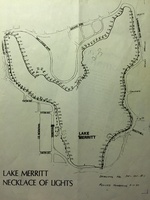 map courtesy Jaynie Thaler MooreThe Necklace of Lights (August 27, 1925-1941, 1985-present) is a string of more than 4,000 lights along 126 lampposts encircling the 3.4 miles of Lake Merritt. Installed in 1925, the lights were turned off during WWII to comply with wartime blackout requirements. On May 3, 1985, the Necklace of Lights was designated Oakland Landmark #LM 85-39.

There were also plans to put a lighted fountain in the middle of the lake. 6

On the evening of August 27, 1925, Commissioner of Streets William J. Baccus pressed the button and officially turned the lights on. This was the kick-off for a multi-day celebration, including fireworks, a band concert at the bandstand led by Paul Steindorff, boat races including Cliff Durant, and more. 9

The lights weren't turned on every night; at times they were left off as a cost-cutting measure. 10 In general, the necklace was only lit on special occasions like the Fourth of July. 11

Discussions about a permanent 'necklace of lights' began in 1922. Several designs were considered for the 'electroliers', 3 including one by Howard Gilkey. 4 Funds for the wiring and conduits came from the parks department; donations from businesses, organizations and individuals were used to purchase the lamp poles at $120 each. 7 The total cost of the project was estimated to be about $71,000. 5 Besides the poles, there were 3041 lights and 32 flood lights. 8 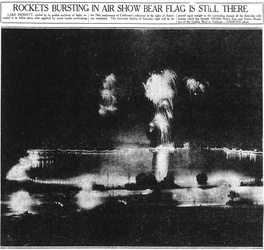 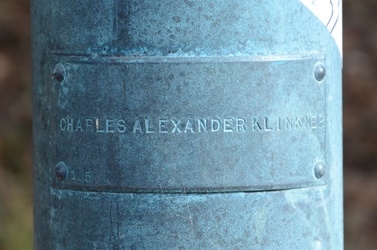 During WWII there were blackout restrictions in place and the necklace was unlit. Following the war, plans were made to refurbish and relight the necklace. 14 According to one article, the light poles had almost been collected for scrap metal during the war. 15

There was push back about the costs, saying $250,000 was too much; 18 pools for children were more important; 19 a few people even said they thought the necklace was unattractive. 17William Penn Mott, Jr., the superintendent of parks, responded that if the whole project were done from scratch, it would cost about $200,000. But (a) they weren't redoing everything from scratch and (b) they weren't redoing the 'necklace', just refurbishing the 126 main lights. 16 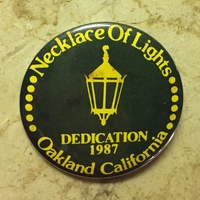 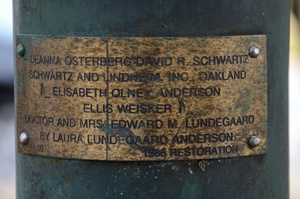 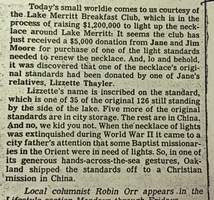 After fund-raising by the Lake Merritt Breakfast Club, in 1985, as part of a 10-year beautification campaign, the Necklace of Lights was reinstalled and once again lit every night from dusk until dawn.

During the July 14, 1987, MLB All-Star game held in Oakland, the Necklace of Lights was turned back on.

Maintenance and operation of the necklace's outdated electrical system (it used 11-watt incandescent bulbs) was expensive for the City of Oakland. Energy efficient solutions were sought with the assistance of Oakland's Public Works Agency and Pacific Gas and Electric Company. TCP, Inc., a manufacturer of energy efficient lighting systems, was selected to provided new bulbs.

In the Fall of 2006 the Oakland Public Works Agency replaced the old lights with 3-watt cold cathode lamps. Besides using a fraction of the energy, the new lights last about 8 times longer and are brighter. Their cost savings was calculated at over $9,000 a year (in 2006 dollars) with a 75% reduction in annual maintenance costs.

In late October, 2013, thieves stole 40,000 feet of copper wire from the Necklace of Lights, making a large portion of the lights dark. It's unclear how long it will take to replace the lights. 2 Theft and vandalism wasn't a new problem, though; in 1934 someone broke in and stole a motor that was required to use the lights. 13 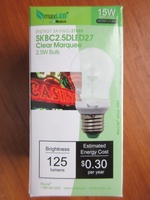 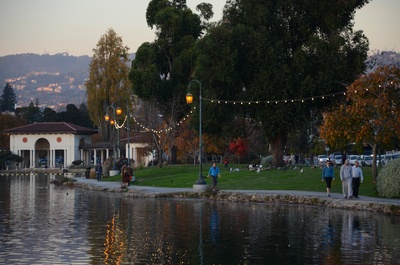 Necklace of Lights
photo CC SA-BY from Our Oakland