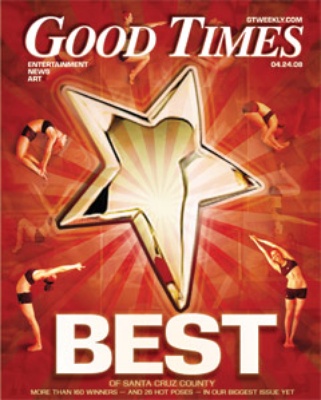 Good Times has been Santa Cruz Counties leading free, local, weekly newspaper since 1975.  The editorial mission of the paper is to inform and entertain the community while encouraging its readers to explore and engage in community action, and look deeper into some of the issues that concern its neighborhoods.

While classed as an 'alternative' newsweekly, the layout, content and form is unlike the weeklies in other communities due to its more mature and balanced coverage on all aspects of community.

Metro Newspapers, parent company of the Santa Cruz Weekly publication, purchased Good Times in March 2014, and has combined both publications under the Good Times name.

This article was published in the April 16, 2007 edition:

The Santa Cruz Wiki invites you to drop your hints online

According to his MySpace page, Robert “The Umbrella Man” Valentino has 1,780 friends (citation needed). I found this link on http://scwiki.org, the year-plus-old Santa Cruz repository of user-generated knowledge, along with a satellite image of the “The Giant Hedge” on Getchell Street, a list of vending machines on the UC Santa Cruz campus, and the following poignant tip: “Though Dumpster Diving is illegal, many grocery stores and bakeries throw out lots of food on a regular basis.”

The Santa Cruz Wiki is modeled on, and hosted by, the enormously popular city wiki for Davis (http://daviswiki.org). The founder of the Santa Cruz branch is Aaron Lehmann, a fourth-year electrical engineering student at UCSC whose friends from the Bay Area went to UC Davis and founded Davis Wiki. While the latter has grown by leaps and bounds into a 9,000-page community replete with in-depth discussions and idiosyncratic nooks of locals-only information, the Santa Cruz version carries just 500 pages, most of those just Stubs (seed pages waiting for a user to add more information).

2007-04-26 I’d definitely like to see it get bigger and more useful, and a lot of different pages covering more scope. Just more people would be the best, doing consistent contribution. —AaronLehmann

Right now, with Lehmann too busy with schoolwork to contribute as much as he’d like, the fort is being manned by one superuser, Mary Lieth, another UCSC student who sometimes goes by “firebunny of_doom.” She hails from Davis, and has become so enamored of the communal possibilities that she’s become a self-professed Wikivangelist.

2007-04-26 What I see it as is a resource for people to communicate what’s going on. Things get stuck in channels of mediation, because people only advertise and consume in certain patterns and get used to it. In a wiki you can easily hop from one thing to another and not really know where you’re going, which makes it easy for people to find out about new things. —MaryLieth

The Davis community grew to the point that it started to feed back into the natural geographic community. After a certain restaurant in town received a number of withering reviews on the site, it decided to be proactive and offer free food and drinks to Davis Wiki users on “Wiki Wednesdays.” A good many local political issues have also been hashed out in the discussion areas behind the scenes of the informative pages (citation needed).

Lieth says the similarities between Davis and Santa Cruz mean the same thing could happen here, though she feels the possibilities are even greater in this town because of the unique local history.

2007-04-26 The one in Davis was started by students and it grew from that aspect, but being a “local” there I could always tell there was hostility toward the students, and there’s that same tension here, but I try not to be a stuck-up student. I try to meet my neighbors and be a part of this community even though the stereotypical student kind of ignores everyone. —MaryLieth

Lieth went through a period of spreading fliers around town inviting people to edit, but has found it difficult to recruit other editors who share her enthusiasm. (She says that building a resource is its own satisfaction, and has even turned to retyping phone book information in order to beef up certain entries.) Still, she has a lot of faith that the spark will eventually ignite.

2007-04-26 I think it could be really embraced by the community if it gets exposure. The community tends to embrace this sort of free-form ground-up media, like Free Radio Santa Cruz. It just needs some people to stick with it and make it happen. I have a lot of hope. —MaryLieth

Lehmann also holds out hope that people will check out the site and see the possibilities for true user-generated media.

2007-04-26 Just a few more core contributors would really catalyze the process of growing the site. Anyone who’s interested in contributing is definitely welcome to. There are no barriers to it at all. —AaronLehmann

And by the way, nobody calls me "firebunny of doom"; that's just an email handle. — MaryLieth