Where Waddell Creek meets the sea. Photo by John Pilge: 2010

There was a settlement named Waddell along Waddell Creek listed on a map of 1873. It had a post office from 1890 to 1891 as federal records show it served 130 residents. It continued to appear on maps at least as late as 1907 and possibly later.

The Waddell Creek Association is a group of volunteers that help with information about the area. During summer, you can find them at Waddell Beach. 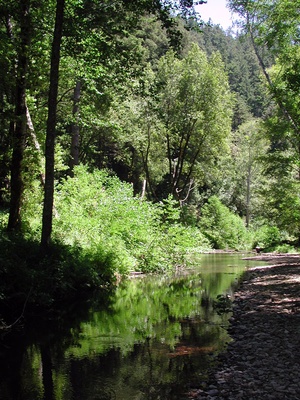 The beach area was originally named Cañada de la Salud (Gorge of the Health) by the Spanish explorers. They had to stop and spend extra time there due to bad weather (in October). Many were sick and all were wet and tired. They had a lot of blackberries to eat from the area. This change in diet may have made them feel well enough to call the area "Gorge of Health."

William White Waddell built several lumber mills in Santa Cruz County. In 1861 he built a mill, a tramway and a pier in the Waddell Creek area. The mill burned in 1864 and was re-built. In 1875 William Waddell died from injuries suffered in a bear attack. The newer lumber mill burned in 1883.

Big Creek Lumber is nearby to the south. Nearest stores are in Davenport (to the south).

Santa Cruz Metro Transit Route 40 makes two trips a day to Waddell Creek Beach. Once after 9am and again just after 5pm.

2012-03-12 00:26:25   Hulda Hoover McLean lived in a home in the Waddell Creek Valley for many years until her fairly recent passing. Her uncle was President Herbert Hoover. McLean wrote some great essays about the Waddell Creek area. —AlexDarocy