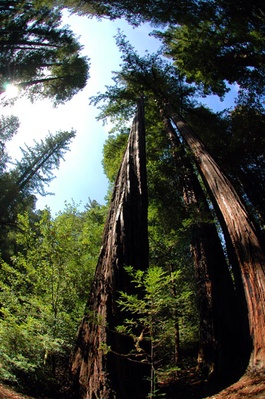 Big Basin is known worldwide for its large Redwoods

Big Basin Redwoods State Park is the original redwood park - the original California state park, in fact. The largest state park in Santa Cruz County, Big Basin is also home to the tallest redwoods south of San Francisco.  The park's best-known attractions include the half-mile Redwood Trail, home to the park's biggest trees; Berry Creek Falls, a large waterfall in the midst of mosses, ferns, and forest; and the Skyline-to-the-Sea trail which, when hiked from beginning to end, takes backpackers through two state parks and a wide range of ecosystems.

In 1902, in response to public outcry over the destruction of California's unique old-growth redwood forest, the state of California began purchasing parcels of land, consisting of both ancient and recently logged forest, on which to establish California's first state park.  Originally dubbed Redwood State Park, the new reserve attracted thousands of visitors each year after it opened to the public in 1904.

A plaque at Big Basin says this:

Big Basin is home to several redwood trees notable for their enormity.  The tallest, known as the Mother of the Forest, recently reached 329 feet high1.  Its top was blown off by a storm, however, and it now measures about 270 feet.

The Fog Creeps in From the Coast