Full House was a television show that aired in the late 1980s and early 1990s. It was set in San Francisco.

The show was about a family that lived in San Francisco. Most people think they lived in one of the Painted Ladies on Postcard Row, but that's actually inaccurate (see below). The family was made up of a widowed father, his three daughters, his best friend, and his brother-in-law who would marry a woman and have children throughout the course of the series. All of these people lived in the house, in true San Francisco fashion.

The opening credits give a few nice shots of Alamo Square, Fisherman's Wharf and the Golden Gate Bridge. 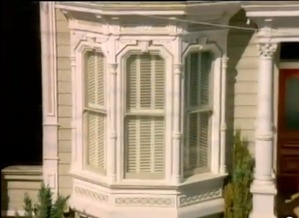 The house shown in the opening credits of Full House, which features a red door and markably different facade than any of the painted ladies on Postcard Row.

Okay, so of course the Tanners didn't actually live on Postcard Row because they were just characters on a TV show, but within the universe of the the television show the Tanner family was never intended to have lived on Postcard Row.  The house shown in the opening sequence, with a red door, is actually located a mile north of Postcard Row at 1709 Broderick Street.

The opening credits of Full House, for the first several seasons, showed the Tanner family running around in various parks, etc.  The sequence ends with a zoomed-out shot of their home, which featured a white facade and a red door, and showed the surrounding homes.  The house shown is located at 1709 Broderick Street, not one of the Painted Ladies on Postcard Row. 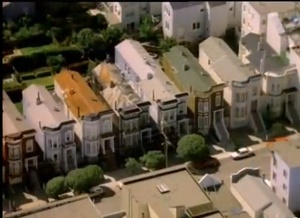 The Tanner family home, zoomed out. From the opening credits of Full House, season one.

Beginning in Season Four of Full House, the Tanners were shown having a picnic in Alamo Square Park with Postcard Row in the background, leading to the widespread belief that the Tanners lived on Postcard Row. 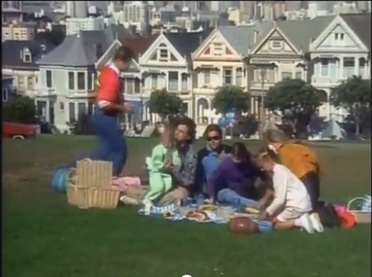 The iconic scene, which was included in Season Four, where the Tanners picnic in Alamo Square Park.

As the almost creeplily-detailed full-house.org explains, the Tanner family, when asked on the show where they live, would sometimes say they were at 1882 Gerard Street, an address in the Bayview. 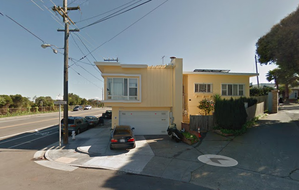